The SEAT Toledo is a spacious and practical saloon, and it offers great value for money, too 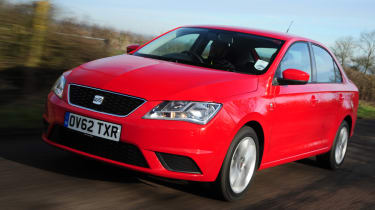 The SEAT Toledo sits between the Ibiza and the Leon in the range, and is almost exactly the same car as the Skoda Rapid. It's a lot cheaper than the Skoda, though, and it's practical, too, with huge amounts of space thanks to its hatchback body. The SEAT Toledo is available in three specifications - entry-level E, mid-range S and top-of-the-range SE. Although it's bigger and cheaper than a Volkswagen Golf, it doesn't offer much in the way of driving thrills like the Golf does.

There are two petrol engines on offer, a 1.2-litre and 1.4-litre, and there's also a 1.6-litre TDI Ecomotive. The diesel is the best overall, it reaches 0-62mph in 10.6 seconds, which is more than enough performance for driving around town, and suitable for the motorway, too. Meanwhile, the 1.2-litre and 1.4-litre petrols manage 55.4mpg and 45.6mpg respectively. It's worth mentioning that in terms of driver enjoyment, there's not that much fun to be had with the SEAT Toledo. The ride isn't as composed as you'll find in a Volkswagen Golf or the Ford Focus, either.

On the whole, the SEAT Toledo is pretty inexpensive to run. The 1.6-litre TDI diesel is the most frugal by far, it manages 72.4mpg, which should get you a tank range of around 850 miles. It also emits 104g/km of CO2, meaning it just misses out on the tax-free 100g/km mark. The turbocharged 1.2-litre TSI, meanwhile, returns 55.4mpg and emits 119g/km of CO2.

Outer appearance isn't really a strong point for the SEAT Toledo. It's intended as a funkier version of the Skoda Rapid, but still, it's not likely to turn many heads. It comes in three main specifications, ranging from the entry-level E, mid-range S and top-of-the-range SE. Entry-level models miss out on alloy wheels and make do with steel wheels. Meanwhile, on a mid-range SEAT Toledo S, you'll find body coloured door handles and door mirrors. At the top of the range, The SEAT Toledo gets steering wheel-mounted audio controls, six speakers and a USB port. The dashboard of the SEAT Toledo is centred around simplicity, and most people will be able navigate themselves around the cabin easily.

Thanks to the large dimensions of the SEAT Toledo, there's a hefty 500 litres of boot space on offer. That's 200 litres bigger than a Volkswagen Golf, and there's a wide hatchback opening that provides great accessibility. You can also easily fold down the rear seats to create even more boot space, too. Mid-range S models get split-folding rear seats, but they don't fold entirely flat. Legroom is plentiful and there's enough headroom for tall adults to sit in relative comfort.

In the 2013 Driver Power customer satisfaction survey, SEAT finished 27th out of 32 - not a great start. The SEAT Toledo itself didn't qualify for the survey, but it did secure the maximum five-star rating in the Euro NCAP crash safety tests. The Toledo comes with anti-lock brakes (ABS), electronic stability control (ESP) and a host of airbags, including front, side, head and additional chest airbags all fitted as standard. Plus, the SEAT Toledo shares a similar platform to the Volkswagen Polo, which means it's tried and tested - few Polos have issues with engines or anything else for that matter. 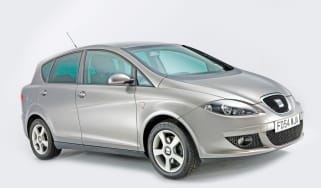 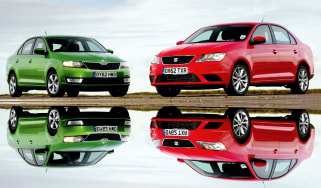 The new SEAT Toledo is the mirror image of its sister car, the Skoda Rapid. But which budget hatch is the better buy?
SEAT Toledo 1.2 TSI 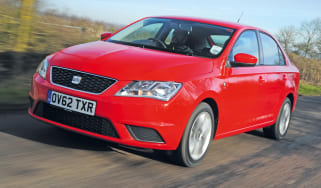 Is the lower-powered petrol engine a better fit for the SEAT Toledo? We hit the road to find out
SEAT Toledo prices 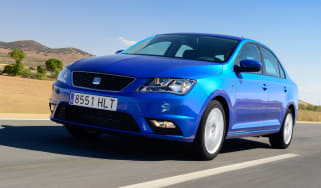 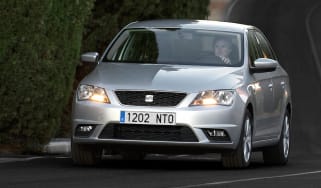 The SEAT Toledo has gone back to its saloon roots, but is it a return to form, too?
New SEAT Toledo revealed 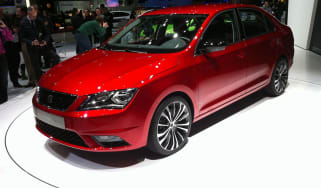 New SEAT Toledo concept has made its debut at Geneva, and gets a saloon shape and hatch tailgate
SEAT Toledo review (2007-2008) 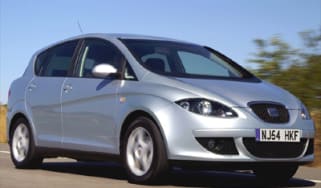 The Toledo is a hatchback based on an MPV that's trying to be a saloon.
SEAT Toledo 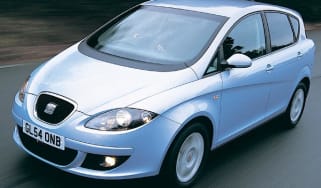 It's time for SEAT to 'go large' as the first right-hand-drive Toledos land on British shores. The firm has already made a big impact with its VW Golf…
SEAT Toledo 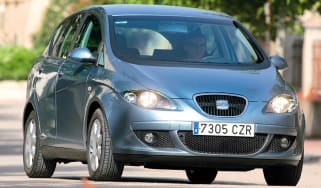 There was a time when the car market was simple. You could buy small cars, medium-sized cars and big cars. Then came MPVs, SUVs and models that were s…
SEAT Toledo 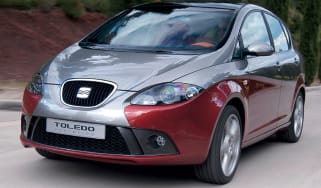 It's big. In fact, it's absolutely huge. That was the first thing we noticed about the new Toledo when SEAT offered us the opportunity to climb behind…
SEAT Toledo 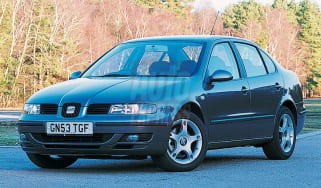 Most new car buyers' wishlist reads something like this - bargain price, cheap to run, gutsy performance and plenty of space. Impossible? Well, SEAT c…
Skip to HeaderSkip to Content