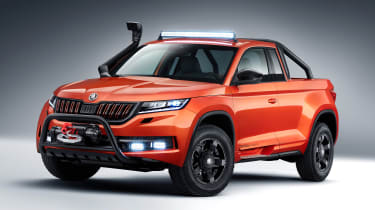 Skoda has unveiled a one-off pick-up truck called the Mountiaq, which was designed and built by students at the firm’s vocational school.

A total of 35 apprentices collaborated in designing and building the Skoda Mountiaq, making it the sixth one-off Skoda to be built by students showcasing the skills they have learned during their education.

Once the final design of the Mountiaq was finalised, the process of building it began in January. The students started with a Skoda Kodiaq and aimed to combine the appeal of a contemporary lifestyle vehicle with the usability of a pick-up. 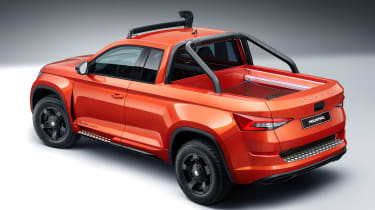 They began by reinforcing the car’s body, before removing the roof and fashioning a new rear panel for the cab, as well as new windows at the back and sides. The doors also had to be shortened and widened to fit the new shape of the vehicle. Modified bumpers were added at the front and rear, along with running boards on the door sills.

The Mountiaq is fitted with a 2.0-litre TSI petrol engine, producing 187bhp, and sits on 17-inch Rockstar II wheels with special off-road tyres, increasing its ground clearance by 10 centimetres over that of a Kodiaq Scout.

The load bed at the rear of the Mountiaq has a set of hidden storage compartments underneath and a fully functional tailgate. The vehicle is finished in a tailor-made paint colour called Sunset Orange and features an air intake snorkel, a winch and bullbar at the front.

In addition, there are lighting effects in the load bed, radiator grille, bonnet logo and engine bay. The front fog lights have been redesigned, too, and a large light bar can be seen on the roof. 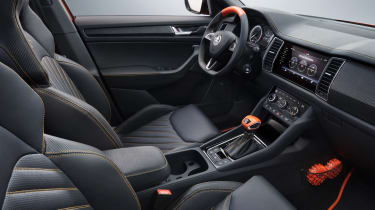 The Mountiaq’s interior features leather upholstery, with orange accents for the steering wheel and gear lever surround, while the 320-watt speaker system is boosted with a 2,000-watt amplifier and 2,000-watt subwoofer.

Carsten Brandes, head of the Skoda Academy, said: “Like its predecessor models, the Skoda Mountiaq highlights the exceptional technical competence and craftsmanship of our students.

“Year after year, their work demonstrates the superior quality of the professional training at our vocational school.”

Do you want Skoda to put the Mountiaq into production? Let us know your thoughts below...