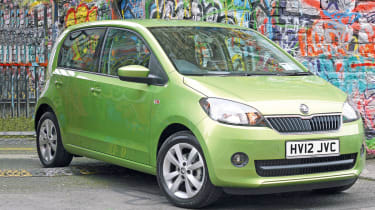 Few new cars on sale for less than £10,000 hold as much appeal as the new five-door Citigo – other than the equivalent SEAT Mii and VW up! of course. But we think the Citigo is the best of the bunch, especially in Elegance spec. It’s relatively basic inside, but it all works well, plus the car isn’t out of its depth on the motorway.

If the VW up! isn’t your thing, the Skoda Citigo is a cheaper and equally talented alternative. A more practical five-door version of our reigning Car of the Year has also hit the UK, promising big car ability in a city car-sized package.

Clearly, the Skoda isn’t meant to be a family’s main car, but it’s relatively practical – especially in five-door format. So long as the front passengers don’t have particularly long legs, there’s plenty of room behind for two adults. The boot is deep and has a 251-litre capacity, or 959 with the seats down, as on the up!.

For just under £10,000, you can get this top-spec Elegance model – and it’s the one to have, despite costing nearly £1,000 more than the Citigo SE. It adds alloys, foglights and electrically adjustable and heated door mirrors, plus heated front seats and a leather steering wheel.

However, the biggest selling point for tech-savvy customers will be Skoda’s nifty Portable Entertainment Device (PID), which is standard. A removable five-inch touchscreen interface accesses extra trip computer data and features sat-nav, Bluetooth and a micro SD input for music files. We just wish the screen was a bit bigger; it’s tricky to use for anything other than the basics when on the move.

Skoda offers the Elegance with 59bhp or 74bhp versions of the characterful three-cylinder 1.0-litre petrol engine, but you only need the latter if you venture out of town regularly. The 74bhp car is also the only one to have stop-start as part of the GreenTech package – yet the lower-powered car returns better economy, at 68.9mpg, and emits less than 100g/km of CO2 to give exemption from road tax.

No matter which power output you choose, the Citigo impresses with its big car manners. It nips in and out of small gaps eagerly, yet still soaks up broken urban roads with aplomb. It also keeps up on the motorway. What really stands out, though, is the Skoda’s composure and stability.

Pop-out rear windows are reminders that this car is made to a price, but it’s still desirable – especially at less than £10,000.