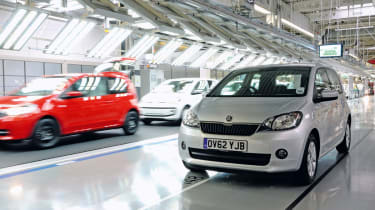 Normally, the thought of driving nearly 1,000 miles across Europe in a three-cylinder city car would fill me with dread. But having collected our new Skoda Citigo from the factory in Slovakia, I was relishing the prospect of taking the wheel for the journey back to the UK.

After all, it’s our reigning Car of the Year – and there’s no better way of really getting to know a car than on a proper road trip.

Leaving the Slovak capital, Bratislava, first impressions were good. Our Elegance-spec Skoda’s standard touchscreen navigation is really easy to use, and the mapping is clear.

It’s just what you need when you’re finding your way out of a busy city in the middle of rush hour. Unsurprisingly, the little Skoda is great around town, too.

And things stayed positive on the dual carriageway to the Austrian border, as high-speed refinement is really good. The three-cylinder engine works away happily without fuss, and there’s remarkably little road or wind noise, plus the ride is fantastic.

While the phrase ‘little car with a big-car feel’ is something of a cliche, it still applies to the Citigo. The seats are comfortable and there’s plenty of stowage for snacks and drinks. The audio system isn’t bad, either, and after a couple of hours behind the wheel my respect for the Skoda grew.

By the time we left Austria for Germany I was thoroughly enjoying myself, and after a brief overnight stop in the Bavarian city of Nuremburg, I was up early and back on the autobahn, hoping to cover some big miles.

Light traffic and plenty of derestricted sections meant I had the chance to drive the Citigo flat out. With only 74bhp, it’s a little sluggish on steep hills, but once cruising it can hold its own and feels stable at speed.

Better still, the first couple of fill-ups revealed economy around the 36mpg mark, which is really impressive given that the throttle pedal was pinned for long periods. In fact, it’s only the 35-litre fuel tank that makes the range relatively short.

Heading deeper into Germany, the temperature plummeted as low as minus seven degrees Celsius, but as we’d specced our car with winter tyres, we decided to turn off the autobahn and travel across the Eifel mountains towards Belgium.

Here, the nicely weighted steering, strong brakes and snappy gearshift meant the Citigo was fun and reassuring on tricky roads, while the stunning scenery helped the miles pass by easily. But with all of Belgium and a brief final leg through France still to go, there was no time for sightseeing.

It’s a testament to the Citigo that when I finally reached the Channel Tunnel, I still had a smile on my face. And if I’m honest, I was actually feeling a little disappointed the road trip was nearly over. In the end I covered 998 miles, averaged a decent 40.6mpg and enjoyed every minute of the trip.

Our new Skoda was left dirty but unflustered by its rigorous introduction to life on the Auto Express fleet. And so far it has continued to impress in more mundane day-to-day motoring, too.

“Gone are the days when you’d need a big car for an epic road trip. Owen’s pan-European jaunt proves that the Citigo is far more than just a talented urban runabout.”Dean Gibson, Deputy road test editor

“I got my Citigo last month and it’s a great little car. It has won me over with its peppy engine and sharp handling.”aprilflowers, via www.autoexpress.co.uk