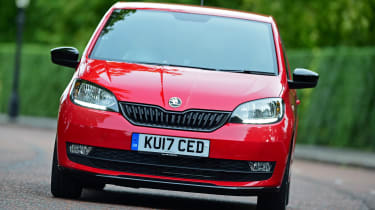 The Skoda Citigo costs less to buy than its Volkswagen up! and SEAT Mii sister cars and none of the three is expensive to run, so you can expect real-world fuel economy in excess of 50mpg in mixed driving. CO2 emissions are low, too, especially as all models now come with the GreenTech package of enhancements, which includes low-rolling resistance tyres and a stop-start system to help save fuel. 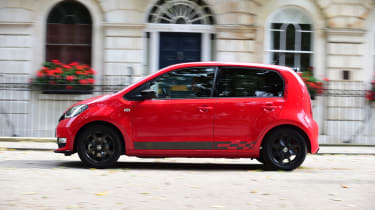 The entry-level 1.0-litre 59bhp engine returns up to 55.4mpg on the latest WLTP test cycle and emits 96g/km. The more powerful 74bhp is nearly as good, with economy of up to 53.3mpg on the WLTP test and 97g/km of CO2. You’ll probably never notice a difference between the lower and the higher-powered versions at the pumps.

A low list price and tiny engines make the Citigo a favourable prospect with insurance companies. It starts in group two, almost as low as it’s possible to get. Some models with more equipment move up to group three, but no model is higher than group four. Mind you, whatever way you look at it, that’s still extremely low and the Skoda is a cheap car to insure in any form.

It’s a pretty similar arrangement for the Citigo’s sister cars, the Volkswagen up! and the SEAT Mii, both of which start in group one. The Toyota Aygo, by contrast, starts in group three, and while that’s still unlikely to cost a packet, it’s two groups higher than the Skoda from the off.

The Citigo’s low price means there’s little in the way of cash to lose in the first place. Even so, it does well in terms of depreciation: our experts have calculated that the Skoda will hold on to 42-47 per cent of its original value after three years, depending on which model you go for.