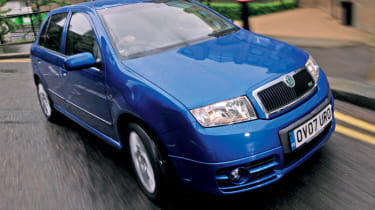 We can't think of a run-out, limited-edition version that has impressed us as much as the new Skoda Fabia vRS. Despite its advancing years, it remains a capable supermini, and has more than enough performance to impress even the most demanding hot hatch fans. Available in limited numbers,the model signs off the many achievements of the Fabia in fine style... it's surely a future classic.

All good things must come to an end - even for Skoda's Fabia. With a replacement version on the horizon, the current model's days are numbered, but that doesn't mean its time on new car forecourts is going to end without celebration.

And what better way to do it than with the flagship vRS. Called simply the Limited, this last-of-the-line edition represents the final opportunity drivers will have to get their hands on a showroom-fresh vRS until a new version is launched next year.

Based on the top-spec SE-trimmed car, it has distinctive metallic blue paint, 16-inch alloy wheels and tinted rear windows. Chrome extras, complete with a special exhaust pipe, add a touch of class that helps to justify the £13,010 price tag.

Inside, every option available to the current Fabia comes as standard. So, you get luxuries such as air-conditioning and a six-disc CD player, but also sporty touches including vRS-badged bucket seats.

With 130bhp and 310Nm of torque on offer from the 1.9-litre turbodiesel, performance is stronger than the sprint time from 0-62mph of 9.5 seconds suggests. In-gear acceleration is smooth, and though there is a fair degree of turbo lag, the car has easily enough punch to keep up with more powerful, petrol-engined competitors. The steering is light, yet accurate, and although the vRS's suspension can't offer the same blend of comfort and stability as some of its more modern rivals, there's no shortage of grip.

However, there's no escaping the Fabia's age - it now certainly feels its seven years! Ignoring the cabin's slightly awkward ergonomics, the diesel unit is harsh - in our test car, vibration was so strong it actually shook the steering wheel.

On the plus side, the Fabia's material quality has stood the test of time much better, and there's a real upmarket ambience thanks to the dashboard coverings and seat fabrics, which still look and feel very smart. There's clearly life in the vRS yet, both as a driver's car and a smart hatchback. And while we know even greater things are around the corner from its replacement, there's no doubt that once this vRS is gone, it will certainly be missed.