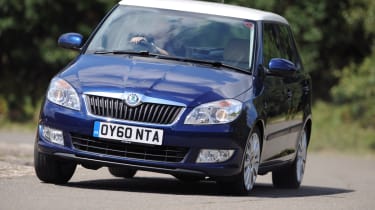 The Skoda Fabia is a Ford Fiesta-rivalling supermini from the Czech manufacturer, that shares its underpinnings with its sister cars, the Volkswagen Polo and the SEAT Ibiza.

The latest Fabia was launched in 2007, meaning it’s feeling a little old now. It certainly can't match the Fiesta in terms of driving enjoyment. However, the little Czech car is very comfortable thanks to its soft suspension.

Skoda offers the Fabia in a wide range of trim levels, the entry-level S, mid-range SE and Monte Carlo models, the ultra efficient Greenline and the flagship Elegance. There is also a performance orientated Skoda Fabia vRS. Buyers can select the option of a seven-speed, dual-clutch automatic gearbox on delected models throughout the range.

The Skoda Fabia is arguably the best value of the Volkswagen Group superminis thanks to its generous amount of standard kit - even entry-level S cars are MP3 ready, and get ABS and Hill Hold Control as standard. It is, however, worth noting that its interior looks old and feels cheap in comparison to the Polo and the Ibiza, and entry-level models are also bereft of air conditioning.

In addition to the three and five-door hatchback body, the Skoda Fabia is also available as an estate, or the rugged looking Scout, which gets plastic body cladding to give it a 4x4 appearance.

The Skoda Fabia isn't exactly inspiring to drive and doesn't give anywhere near as many behind-the-wheel thrills as a Ford Fiesta. The steering - even on the sporty vRS model - is pretty numb, and the soft-suspension means there's a fair amount of body roll in the corners. 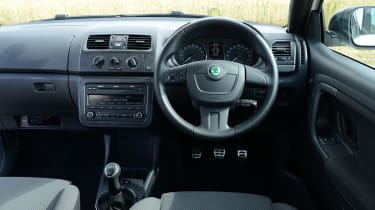 While its not particularly sporty, it'd be fair to describe Fabia's driving experience as grown-up. Its soft suspension is excellent at smoothing out bumps, meaning it tackles the UK's increasing number of potholes with aplomb. In fact, it's even more comfortable than the Polo.

All of the engines in the Skoda Fabia range are strong, which should come as no surprise as they're sourced from Volkswagen.

The 59bhp 1.2-litre petrol unit that powers the entry-level S model is pretty noisy, but it'll do 51.4mpg and emit 128g/km of CO2. On mid-range SE models upwards, the 1.2-litre unit is also available with other power outputs.

There is a 68bhp variant which returns the same emissions, and an 84bhp engine which does 54.3mpg with CO2 emissions of 121g/km. This is also available on the Monte Carlo model.

Skoda Fabia buyers can opt for a 103bhp version of the 1.2-litre engine which achieves 53.3mpg and emits 124g/km of CO2. When fitted with the seven-speed dual-clutch DSG gearbox, it returns the same MPG, but its CO2 emissions drop to 109g/km. This engine/gearbox combination is available with SE and Elegance trim levels only.

The Fabia is also available with a range of 1.6-litre diesel engines. The one with the least power does 67.3mpg with CO2 emissions of 109g/km. There is also an 88 and 103bhp version of the same engine that returns the same figures.

As it was launched in 2007, some would say the Skoda Fabia's design is starting to look a bit old now, especially when you compare it to the classy Polo or striking looking Ford Fiesta.

Unlike the angular looking Rapid and Octavia, the Skoda Fabia has a much softer appearance and thanks to its steep windscreen and high roofline, it gets a more upright and less sporty look than a SEAT Ibiza.

The Fabia's black A-pillars make it look bigger than it actually is and the roof, which is available in a different colour to the body on higher-end models, almost looks like it's floating above the rest of the car. The Fabia Estate while more practical than the hatch does look a bit lumpy.

This being a Volkswagen Group car, it's not a surprise that the Skoda Fabia's interior is well screwed together and sensibly laid out. However, it's let down by drab dark plastics which make it look incredibly boring inside.

In spite of its small dimensions, the Skoda Fabia is very spacious. While the cabin may be slightly dowdy on entry-level S models, it's certainly very airy and doesn't feel cramped at all.

While five adults may struggle to get comfortable in the Fabia, it'll take four with ease. Skoda has also given it plenty of storage and if you look closely, you'll see deep door bins and plenty of cubbies dotted around the cabin.

The Fabia eclipses the Ibiza and Polo for bootspace. It gets 315 litres of capacity, which is significantly more than the 280 litres in the Volkswagen and the 292 litres in the SEAT.

What's more, the Fabia Estate is pretty huge in the back with 505 litres of space available with the seats up. When folded, this increases to a massive 1,485 litres.

The Fabia ranked 94th out of 150 cars in 2014. This is a drop of 30 places. However, it shouldn't come as a surprise given it's getting on a bit now. Drivers criticised it for its handling, ride quality and lack of creature comforts, but it ranked well for practicality and running costs.

Another blot on the Fabia's copybook, is that it only received four out of the maximum five-stars in the Euro NCAP crash tests. Safety equipment such as ESP isn't standard on entry-level cars and in today’s market, that's not acceptable.