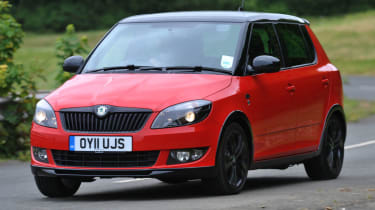 It’s easy to conclude that the Monte Carlo is a sheep in wolf’s clothing, but dig a little deeper and you soon discover that it’s something of a hidden gem. It does away with the standard car’s dowdy looks, and the eager 1.2-litre engine is a willing companion on country roads. Its not the last word in power or handling, but at just over £14,000, it’s an awful lot of car for the money, and something of a cheap thrill too.

Launched to celebrate 100 years of the historic Monte Carlo rally and Skoda’s ongoing involvement in motorsport, this special edition Fabia is designed to give the sensible supermini some much-needed visual flair.

The Fabia has been around a while now, and apart from the turbocharged VRS version, it has always trailed behind rivals like the Ford Fiesta and SEAT Ibiza when it comes to kerbside appeal.

Yet despite keeping the Fabia’s tall and boxy shape, the Monte Carlo makes a great first impression. The exterior has been given an aggressive, hot hatch makeover, and the blackened roof, radiator grille and headlights all give it an imposing on road presence – as do the standard 17-inch ‘Trinity’ alloys.

There’s even a rear diffuser and roof spoiler at the back – although whether they add any meaningful aerodynamic performance is difficult to say. Inside the cabin the changes are more subtle, and while the red sports seats and stitched leather steering wheel are nice touches, the sturdy grey plastics still remind you that you’re sitting in a sensible family hatch.

The Monte Carlo is available with a wide range of petrol and diesel engines, but the 1.2-litre TSI unit tested here is the only one with any real chance of offering enough pace to match the revamped looks.

It may only have 104bhp, but the vocal, eager way that it delivers that power means the Monte Carlo is surprisingly fun to drive. Working the slick five-speed gearbox to extract the best from the small powerplant is really enjoyable, and the chassis is set up for driving fun too.

Underneath, the sports suspension setup means slightly stiffer springs, and combined with the bigger wheels make for a slightly bumpy ride, but it never feels intrusively uncomfortable.

Cornering isn’t as crisp as you might expect though, it doesn’t have the same poise as the Fiesta. The Fabia turns in quickly and roll is kept to a minimum, but understeer is easy to induce, and the steering doesn’t always give you enough information about what the front wheels are up to.

Overall though, the Monte Carlo is a good looking, practical and economical hatch that will be cheap to run and – with this engine at least – fun to drive too.