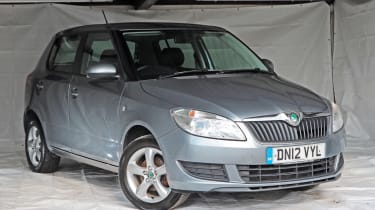 Skoda consistently scores highly in our Driver Power satisfaction surveys, and while the Fabia Mk2 is no longer as competitive as it was, it did achieve three consecutive top-25 placings between 2009 and 2011. With the earliest cars now a decade old its star doesn’t shine as brightly, but it’s still a solid used buy. It’s offered with excellent engines and gearboxes, so if you buy at least a mid-range model you’ll also get decent kit without having to pay over the odds. However, reliability has become a bugbear for some owners, so check that everything works. Also, don’t pay too much for a Fabia, as the car’s excellent reputation means asking prices vary significantly.

For more than a quarter of a century the Skoda brand has been a part of the Volkswagen Group. In that time the company’s product range has been transformed, to the point where owners of the cheaper brand enjoy greater satisfaction levels than those of the parent company.

Maybe it’s because Skoda buyers benefit from all of the great engineering that owners of the VW Group’s more costly cars enjoy, but at lower prices. That’s certainly the case with the Fabia, which offers good build quality and efficient engines but without having to pay through the nose for the privilege. Sensible rather than fun, the previous-generation Fabia is a great used buy; here’s how to buy the right one for your needs. 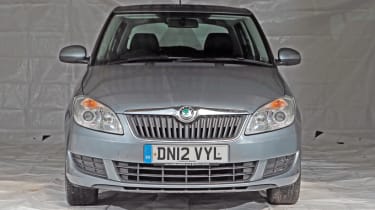 The Fabia Mk2 reached showrooms in May 2007 with 1.2, 1.4 or 1.6-litre petrol engines, along with 1.4 or 1.9-litre turbodiesels. The high-spec Sport arrived in January 2008, with a five-door estate. In April 2008 the ultra-economical 1.4 TDI Greenline was introduced, three months before the Fabia Scout pseudo off-roader appeared. A facelifted model debuted in March 2010, with a 1.2 TSI petrol engine (in 85bhp or 105bhp forms) replacing the 1.6-litre unit.

This facelift also brought a revised nose, optional seven-speed DSG transmission plus S, SE and Elegance trim levels in place of the previous 1, 2 and 3. A Fabia vRS arrived in September 2010, powered by a 178bhp 1.4 TSI engine and offered only with a DSG transmission.

The 2010 facelift brought much better petrol and diesel engines, not least the perky 1.2 TSI. This is easy to recommend, as is the auto-only sporty vRS. Both manual and DSG transmissions are excellent and, in terms of trims, the high-spec Sport is great value. 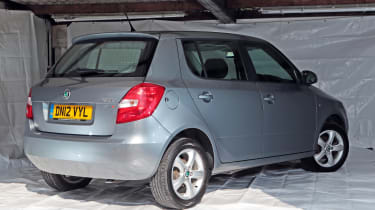 All Fabias have dual front and side airbags, central locking, electric front windows and a split rear seat. The 2 (which became the SE) adds air-con, alloys and electric mirrors, while the range-topping 3 (later the Elegance) includes cruise control and parking sensors. The high-spec SE Plus of May 2011 brought climate control, privacy glass, powered rear windows plus a multi-function steering wheel.

Alternatives to the Skoda Fabia Mk2

Excellent superminis aren’t rare. The Ford Fiesta is cheap and plentiful, as is Vauxhall’s Corsa; both offer superb value with a huge range. The Renault Clio is top value, too, and the current model is an impressive car. Yet while its predecessor is good value, reliability is less certain, so you need to buy carefully.

That’s also true of the Peugeot 207, but if you value dependability above driving pleasure the Toyota Yaris should be on your shortlist. We’d also consider the SEAT Ibiza – effectively a reclothed Fabia – which looks sharp and is great value. Two more that focus on reliability and value are the Hyundai i20 and Kia Rio, which we’d also recommend.

The interior trim can be fragile, as some of the plastics are cheap. Watch for trim coming apart, and for the electric window switches popping out of their sockets. 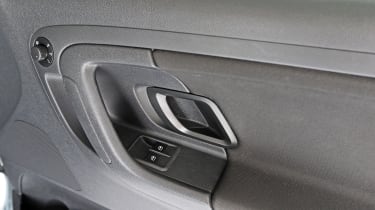 Many Fabia owners are disappointed with the standard headlights; swapping to Osram Nightbreaker or Phillips Xtreme bulbs is usually the preferred solution.

Squeaks and rattles can sometimes crop up, particularly from things such as the dash rubbing against the screen surround and the pedals needing lubricating.

Oil consumption can be an issue, especially on some of the more stressed (small-capacity, high-output) engines – up to as much as 1,000 miles per litre.

Although the Fabia cabin’s fit and finish are good and the design is clear, few interiors are as sombre as this one, with its drab plastics. There’s ample space for four adults (five is a squeeze) and plenty of cubbies, too. Boot space is excellent at 315 litres – or 1,163 litres with the rear seats folded. 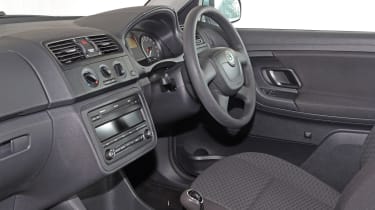 Fabia owners can choose between fixed and variable maintenance programmes. The former is set at 10,000 miles or 12 months, while the latter allows up to 20,000 miles and two years between garage visits. Services alternate between minor and major, at £149 and £269.

The coolant must be checked at each service but there’s no set time for its replacement, while fresh brake fluid is needed after the first three years, then every two years (at £52). Expect to regas the air-con every couple of years, at £75. A cambelt is fitted to all diesels plus the 1.4-litre petrol; a new belt is needed every five years or 100,000 miles (at £335 including a new water pump).

The Fabia Mk2 has been recalled only twice; impressive for a car launched a decade ago. The first started in July 2007 and affected cars built up to the end of May 2007. Incorrect wiring meant that when a sensor detected an impact on some, the opposite airbag would inflate.

The second recall was issued in December 2014 and, as with the first, it also affected the Roomster. This time the problem centred on the fuel filter, which could crack leading to diesel leaking; only TDI models were affected.

We’ve come to expect Skodas to sit towards the top end of our Driver Power satisfaction surveys, but in the latest poll the Fabia managed a mere 144th. Surprisingly, its highest score was for practicality (65th); running costs were 66th. Next came reliability in 98th place; the worst score was for handling (150th).