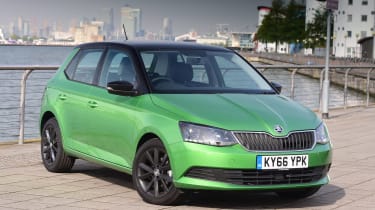 The supermini segment is one of the most competitive of all, because it’s bursting with appealing contenders. But Skoda has risen to the challenge with the Fabia, and it’s a truly brilliant all-rounder that’s very much worthy of your attention. The Fabia is so good that it scooped Carbuyer’s Best Small Car award in 2017, thanks to its focus on practicality and value. As a brand, Skoda has always done well in our Driver Power surveys, partly due to its reliable cars and an excellent dealer network. Like most mainstream superminis, the Fabia won’t make your heart beat any faster, but if you’re looking for a car that’s cheap to run and offers painless ownership, you could do a lot worse than put one of these smart-looking Skodas on your drive.

Skoda has a rich and varied history, having set up as a bicycle manufacturer back in 1895, when the company was known as Laurin & Klement. Since then, the company has gone through various phases, but today it’s best known as a producer of affordable cars.

For a while its products were cheap and not especially cheerful – but they’ve always been tough, and this characteristic stayed in place when the company became part of the Volkswagen empire in 1991.

Sitting alongside SEATs, Audis and VWs, Skodas have long shared the major components of their cousins, and the Fabia supermini is typical of this, which means it comes with efficient engines, good build quality and plenty of user-friendly features.

The third-generation Skoda Fabia reached UK showrooms in January 2015. The range consisted of 59bhp or 74bhp 1.0 MPI non-turbo and 89bhp or 109bhp 1.2 TSI turbocharged petrol engines, or there was a 1.4 TDI diesel unit with 89bhp or 104bhp. Initially there was just a five-door hatchback available, but in March 2015 an estate arrived with the same engines, bar the 59bhp 1.0 MPI. 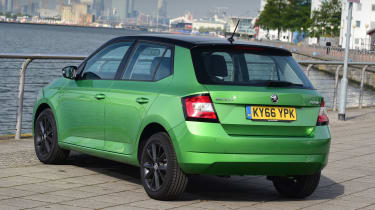 Trim levels for the estate version were S, SE and SE L; for the hatch they were S, SE and Elegance (which was quickly rebranded SE L), with a sporty Monte Carlo edition added in August 2015. A facelifted petrol-only Fabia arrived in September 2018, with a 1.0 TSI engine replacing the 1.2 TSI unit, and extra standard equipment, including navigation on the SE L.

The 1.0 MPI engine lacks muscle, and is only really suited to short journeys. Any of the turbocharged (TSI and TDI) engines are much more punchy and better to live with. Similarly, the DSG auto is great and so is the manual.

The entry-level Fabia S is quite basic, so we’d go for at least an SE. The S comes with Bluetooth, a DAB radio, electric front windows and remote central locking, but the SE adds air-conditioning, 15-inch alloys, better infotainment (including Apple CarPlay and Android Auto) plus an upgraded alarm.

Alternatives to the Skoda Fabia

Closely related to the Fabia is the SEAT Ibiza, which comes with the same engine and gearbox choices, sharp styling (especially in three-door SC form) and plenty of practicality (it also came as an estate). 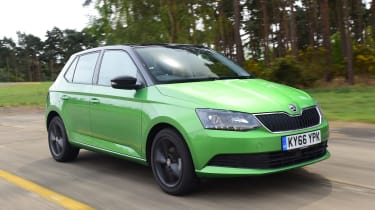 Think of the five-door only VW Polo as a pricier Fabia with a plusher cabin, while the Audi A1 is another step above that. Beyond the VW Group, the MINI hatch is relatively expensive but very desirable and plentiful, while you can’t talk about superminis without mentioning the Ford Fiesta. It’s one of the greatest cars available at any price, because it’s relatively roomy, great to drive, well made, and there are loads on the market.

All three generations of the Skoda Fabia have come as either a five-door hatchback or a versatile small estate.

From the outset the 1.4 TDI diesel was Euro 6-compliant, so it should be fine to use in any UK clean air zones for the time being.

Initially, autonomous emergency braking wasn’t included on the Fabia S, but all facelifted (post-September 2018) cars have it as standard.

Every Fabia comes with a tyre repair kit, but Skoda did offer space-saver spare wheels and full-sized items as optional extras.

Practicality is a Fabia strong point. When it was launched it featured the biggest boot in its class, at 330 litres, which expands to 1,150 litres with the back seats folded. This doesn’t result in a compact cabin, though, because there’s room for four adults to sit in comfort – although five is a bit of a squeeze and cubby space isn’t great. 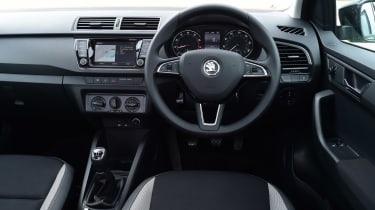 What is impressive is dash and instrument clarity, while getting comfy is easy because all Fabias come with a height-adjustable driver’s seat, plus a steering wheel that adjusts for reach and rake. All Fabias built from 2018 came with a 6.5-inch touchscreen system with Bluetooth and DAB radio.

Fabia owners can opt for fixed or variable maintenance regimes. The former is set at 12 months or 12,000 miles (whichever comes first); the latter is aimed at high-mileage drivers and allows for up to two years or 18,000 miles between services. Most owners opt for the former, which requires two minor services, then from the third year (or 30,000 miles) the services alternate between minor and major, which are priced at £184 and £243 respectively.

Fresh brake fluid is required after three years then every 24 months, at £60. All Fabia engines have a cambelt, which on the diesel should be replaced every 130,500 miles, but there’s no time interval; dealers charge £449 for this. Petrol engines need a new belt every five years (with no mileage interval) at a dealer cost of £479.

The third-generation Skoda Fabia has been recalled on just one occasion so far in its lifetime, and that was in May 2019. It was a campaign that also included a number of other Skoda models – namely the Octavia, Kodiaq, Rapid and Superb, and just 393 cars in all were affected.

These cars were all built in January and February 2018, and the reason for the recall was that they were fitted with an airbag that might not inflate quickly enough in the event of an impact. Skoda’s solution was to replace the steering wheel, because it was only the driver’s airbag that was affected. There isn’t a UK-specific website to check if a Skoda has been recalled, but there is one that’s Europe-wide. You can find it at www.skoda-auto.com/services/recall-actions – just put in the VIN and it’ll tell you if any Skoda is subject to an outstanding recall.

The Fabia Mk3 didn’t appear in the 2020 Driver Power new car survey, but it came 64th in 2019, having peaked in 11th place in 2017. The Fabia ended up 46th (out of 100) in the 2019 Driver Power used car survey, the undoubted highlight being its low running costs, while the infotainment and safety systems impressed. Most other aspects got mid-table ratings, although ventilation and versatility scored poorly.