Sportline trim is as expensive as the Skoda Kodiaq gets, but bigger rims and a sluggish DSG box spoil the SUV’s charm 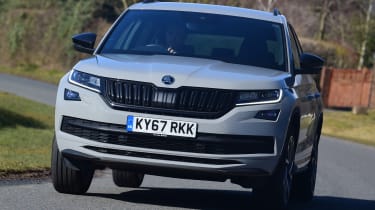 Unfortunately, Sportline trim harms much of what we love about the Kodiaq. The huge 20-inch wheels are at odds with the SUV’s usually comfortable nature, firming up the ride and increasing road noise. The normally responsive diesel engine isn’t at its best when mated to the sluggish DSG box, either. We’d save some cash and opt for the excellent SE L version instead.

This is the most expensive Skoda Kodiaq money can buy. While it’s little more than an SUV in a racy suit, the Czech firm has high hopes for its latest Sportline model, which comes dressed from head to toe in bold, brash trinkets.

Given Mercedes, BMW and Volvo’s success with their respective AMG Line, M Sport and R-Design models, it’s no surprise Skoda wants a slice of the sport-inspired pie. We first saw Skoda’s Sportline trim on the Superb family car last year, but now the spec has been added to the brand’s biggest SUV.

Visual tweaks include the deeper bumpers front and rear, the black grille and matching mirrors, as well as the similarly-specced roof rails and window trims. Every Sportline-badged Kodiaq sits on huge 20-inch wheels and low profile tyres, too. 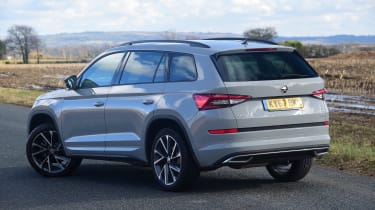 Inside, you’ll find a well-appointed cabin, with a set of swish Alcantara-covered sports seats, a flat-bottomed steering wheel and aluminium pedals. Sticking with the sporty theme, every car comes with selectable drive modes, and carbon-style trim for the dash. The lovely 9.2-inch Columbus touchscreen is also standard.

But on the road, the Kodiaq Sportline undoes much of what we love about the standard car. Those wheels make the ride really rather firm, with little improvement to improve the way the car handles on a twisting back road. There’s more road noise, too, which is a shame, because the softer Kodiaq SE L is a fine long distance cruiser.

Our test car’s flagship 187bhp 2.0-litre TDI diesel engine and seven-speed DSG auto box don’t do the Kodiaq any favours, either. The transmission is reluctant to kick down even in Sport mode, making it feel more sluggish than the equivalent manual car. It can catch you out when pulling away from junctions or roundabouts, too, thanks to the delayed throttle response and frustratingly lazy gearbox.

Body control is good, though, and the steering is pretty precise for a car of this size and bulk. The standard-fit 4x4 system offers loads of grip on greasy roads, as well, though it adds noticeable weight to what is already a heavy seven-seat SUV.

We’ve few complaints perched upon those lovely suede seats, however. The Sportline updates only emphasise what is one of the finest cabins at this price point. The driving position is good, and the clear dials and intuitive infotainment system are a boon. It’s a shame Skoda chose to do without a rotary-style volume control, but the wheel-mounted buttons means changing the settings isn’t too much of a chore.

Quality is excellent, as well, with everything feeling solid and built to last, which is handy in a car so squarely aimed at growing families. Speaking of which, space in the middle row is good, but those two rearmost seats are only really suitable for small children. Still, that’s unchanged over cheaper Kodiaq models, and no worse than in similarly-priced rivals. 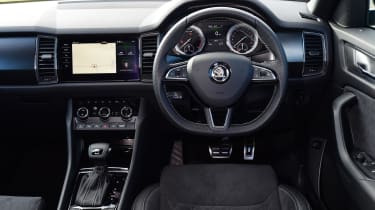 But while the price is high, running a Kodiaq such as this on a daily basis shouldn’t burn a hole in your pocket – especially in diesel guise. Even as a top-spec 4x4, the Skoda will return almost 50mpg, while CO2 emissions of 151g/km make it a better value company car than the equivalent Kia Sorento GT Line S.