The Skoda Octavia vRS has long been the performance estate of choice. Can this latest model see off the challenge of the Ford Focus ST? 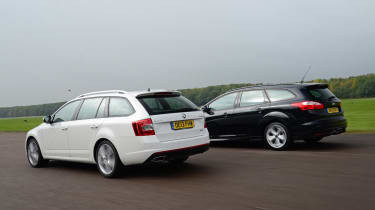 Fast estates are nothing new, but they’ve normally been pricey upmarket models. The rapid Skoda Octavia vRS has long bucked that trend, with a versatile estate version available ever since the car debuted back in 2001.

The combination of space and pace has clearly been successful for Skoda, because the fast flagship load carrier is now in its third generation. Boasting more power than before, the all-new car is the fastest Skoda ever to wear the vRS badge. Yet it hasn’t forgotten its value roots: prices start at a reasonable £23,790, while the twin-clutch DSG model tested here is £25,180.

However, the Octavia isn’t the only practical family car that’s been given the go-faster treatment – Ford offers an ST version of its Focus estate. Featuring the same 247bhp turbocharged petrol engine, uprated chassis and brash looks as the impressive ST hatchback, the hot Ford promises to be as fast as it is vast. Like the Skoda, it’s decent value – the entry-level model costs £23,095. We tested the generously equipped £24,595 ST-2. So which will take top spot?

Badge appeal Ford's ST and Skoda’s vRS badges are relative newcomers to the performance market. ST made its debut on the touring car-inspired Mondeo ST24 in 1997, before appearing on hot Fiestas and Focuses. Skoda’s first performance model was the 2001 Octavia vRS, packing the 180bhp turbo engine from the Audi TT. The badge also appeared on the 2003 Fabia vRS, which was only available with a 128bhp 1.9-litre diesel. 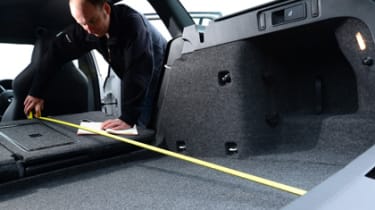 The Octavia takes some beating when it comes to practicality. Our measurements show its boot is longer and wider than the Ford’s, plus the load area has useful hooks, a ski flap and remote release lever for the folding rear seats. 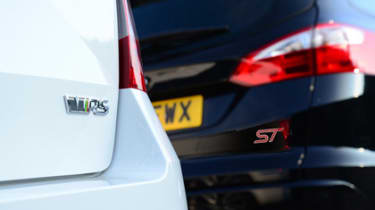 If it’s real-world performance and driving fun you’re after, look no further than the Focus. A combination of higher torque and shorter gear ratios meant the Ford blitzed the Skoda during our in-gear acceleration tests, while its razor-sharp handling always raised a smile. The Octavia is far from slow, but it never feels as eager as the ST, while its engine sounds more muted. And although the Skoda always stays planted and secure, its chassis lacks the Ford’s feedback and adjustability.

The Ford’s storming performance and entertaining handling have survived the transformation from hatchback to estate. Few family cars are as much fun to drive. The brash looks won’t be to all tastes and it’s not as roomy as the Skoda, but in this test, driving thrills count for more.

A vast boot, roomy interior and relatively low running costs combine to make the Skoda a fine choice. It’s also fastand composed on the road, while its stealthy looks are unlikely to attract unwanted attention. Yet it’s a bit dull to drive and the manual costs £695 more than the entry-level ST.