Can the facelifted Skoda Superb compete against its smaller brother, the new Octavia? 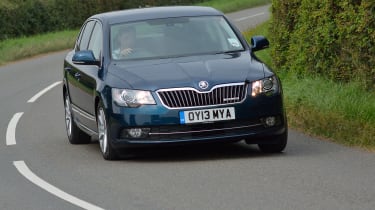 The Skoda Superb remains a good car, but it’s beginning to feel dated, despite this facelift. Put it next to the much newer Octavia, and it’s difficult to make a case for it. The Superb isn’t much more practical, and does without a fair amount of equipment the Octavia gets as standard. Plus, it’s not as cheap to run or as good to drive.

The Skoda Superb had a recent facelift in a bid to stop it being upstaged by its smaller brother, the new Octavia.

We drove the hatch version, in GreenLine III trim, and as with the estate it gets a new grille, redesigned headlamps and foglights, while round the back LED tail-lights are now standard. There are also some new colours and fresh alloy wheel designs to choose from.

Inside, very little has changed with the Skoda Superb. You get a high-quality, logically laid-out dash, while soft-touch plastics are used throughout. Look closely, though, and you’ll spot a few minor updates. A multifunction leather steering wheel now comes as standard across the range, as does cruise control. Plus, all cars now get a six-speed manual gearbox – even the GreenLine version, which used to have a five-speed.

This model is powered by a 1.6-litre diesel, which Skoda says can manage 67.3mpg. It’s not an unrealistic claim – on a 100-mile run up the motorway, we averaged 63mpg without even trying. Meanwhile, CO2 emissions of just 109g/km will really appeal to company car drivers wanting to minimise their Benefit-in-Kind tax.

With just 104bhp hauling such a large car, the big Skoda is never going to feel swift. But once you’re moving, this GreenLine III is more lively than the 12.2-second 0-62mph time suggests. The only problem with the engine is that it’s rather rough – a real shame in a car that’s otherwise very quiet.

Considering its size, the Superb handles well. But while it has accurate steering and plenty of grip, it’s never fun in the way a Mazda 6 is. The ride quality can’t match a Ford Mondeo’s, either. It’s not that the new car is overly firm – it actually feels quite soft, but bizarrely it fidgets over bumps and bangs through potholes.

The GreenLine rides 15mm lower than other Superbs, for improved aerodynamic efficiency, so unless you’re crawling along at 10mph when you go over a speed hump, the front bumper is likely to catch on the tarmac.This is the least of the new five-door’s problems, though – as the new Octavia is a better car. Take the Superb’s boot, for example: the capacity sounds impressive, at 595 litres, but that’s only five litres more than the cheaper Skoda provides.

And while there’s more room in the back seats of the Superb, plus the saloon/hatch Twindoor tailgate, you’d never call the Octavia cramped and we only ever used the hatchback opening during our time with the car. And if you want to fold the seats to increase boot space in the Superb, you get an annoying ridge in the middle of the load area.

Was it too hard for Skoda to update the car with an adjustable boot floor? And was it too difficult for the company to equip it with a DAB radio and USB input as standard, too? After all, this is 2013. Time moves on and, despite a facelift, the Superb hatch is starting to show its age.