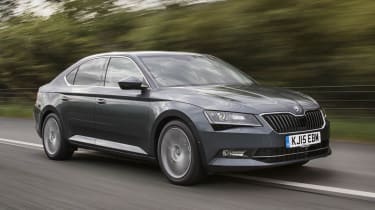 For those who are put off by diesels or simply don’t cover enough mileage to warrant one, the 1.4 turbo petrol is a wise choice. City driving requires a little more patience than a similarly powerful diesel, but the extra refinement it offers more than makes up for it – plus, it’s £900 cheaper than the equivalent diesel. The 1.4 is also a great partner to what is an excellent car – it’s generously equipped, super stylish, spacious and well built.

Skoda’s new Superb strikes right in the heart of the company car class, taking on heavyweights like the Mazda 6, Ford Mondeo and its posher sister car, the Volkswagen Passat. It’s a fair assumption to say that the Czech brand will shift the most Superbs in diesel guise, but as we all know, they aren’t for everyone.

While the 217bhp and 276bhp 2.0-litre petrols will interest those after an executive express, the 1.4-litre options should entice buyers who want a smooth and efficient five-door hatch – the low Benefit in Kind rate of 18 per cent only boosts appeal. 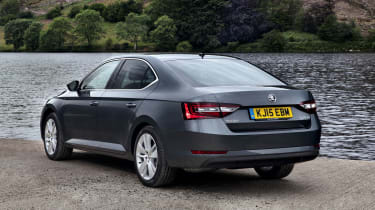 The 1.4-litre petrols will be familiar to many, as they’re used in a wide range of VW Group cars. They pack either 123bhp (only available in S trim) or, like in our test car, 148bhp with 250Nm of torque. Strangely, the more powerful version is cheaper to run thanks to Active Cylinder Technology (ACT). 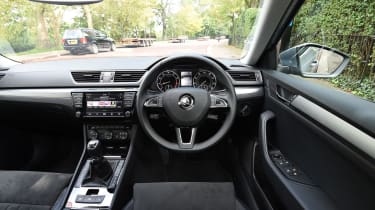 Happily, you won’t notice the cylinders shutting down; you’ll only know the car is running in this eco setting through a ‘2cyl mode’ message on the instrument cluster.

In normal four-cylinder mode, low-speed acceleration is a little sluggish, but once the turbo kicks in, the performance is brisk enough and the petrol comes into its own at motorway speeds by being incredibly quiet. 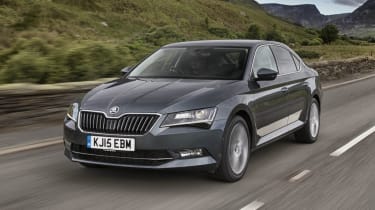 At those low speeds, you’ll be shifting down the gears to make the most of gaps in the traffic, but it’s no real chore, as our car’s six-speed manual box is easy to use – the lever moving sweetly between ratios, accompanied by a light clutch.

The manual of our test car is typical of a VW Group gearbox, as it feels good to use. And while the steering isn’t the finest for feedback, it’s well weighted and precise. 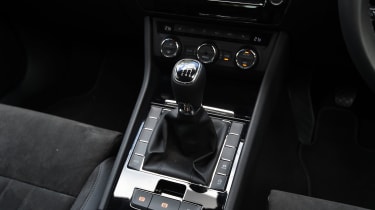 Our Superb came in SE L Executive spec, which is one step down from the top-drawer Laurin & Klement trim. It features a decent amount of kit, with leather seats, bi-xenon lights, 18-inch alloy wheels and a smart-looking eight-inch touchscreen with sat-nav all coming as standard. However, we’d go for the SE spec, which has all of the essential equipment – like 17-inch wheels, dual-zone air-con, folding mirrors and rear parking sensors – for £3,000 less. 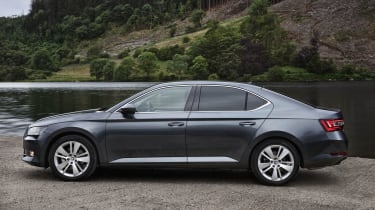 Elsewhere, the Skoda pulls ahead of its nearest rivals with acres of rear legroom and clever touches like handy umbrellas in the front doors. It gets a generous 625 litres of boot space (30 litres more than the old Superb), and that expands to 1,760 litres when the rear seats are folded – 323 litres more than the Mondeo’s capacity.