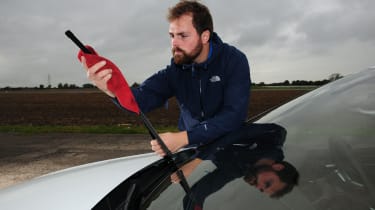 Skoda has given the Skoda Superb Estate a rugged makeover in the form of the Outdoor version. It's intended to cater for those wanting the versatile estate car body with a smattering of off-road ability for muddy country lanes and some slippery slope.

It's one of the best 4x4 estates in the business, offering plenty of practicality, attractive design thanks to extra plastic clading and silver accents - all at an affordable price when compared to larger, high-riding SUVs.

It gets plenty of kit as standard, while Outdoor Plus model is the only one currently available. It features plenty of kit including parking sensors, cruise control, heated leather seats, sat-nav, DAB radio and Bluetooth. Prices start from £30,240.

The Skoda has a 168bhp 2.0-litre turbodiesel engine, producing 350Nm of torque, but the Superb actually feels lighter on its feet than you would think. In our tests, it completed the 0-60mph sprint in 8.5 seconds.

On the downside, the Superb isn’t as refined as you might expect. The engine is punchy, but rev it hard and the engine grumbles away under the bonnet. It’s at its worst under hard acceleration and at higher revs, but if you settle down to a gentle cruise on the motorway it’s noticeably quieter. 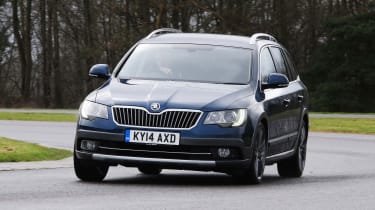 There are no clever off-road modes in the Skoda, so combined with its lower ride height and less generous ground clearance the Superb isn’t a match for the likes of the Subaru Outback away from the tarmac. If all you’ll be doing is crossing wet, muddy fields, though, the Superb will be up to the challenge.

Happily, the benefit is that this model is better to drive on the road. The steering is precise and there’s less body roll, which gives a better connection between you and the car, and inspires more confidence in poor conditions.

It’s helped by the snappy DSG dual-clutch gearbox. This is as smooth as the Subaru’s transmission in everyday driving, but reacts much faster to a sharp burst of acceleration. It’ll kick down quicker and shift up sooner, and really suits the Skoda’s gutsy engine.

The Superb Estate may not be a full-size SUV, but at nearly five-metres long, it’s still a big car and thus economy isn’t spectacular. With CO2 emissions of 149g/km and a fuel economy figure of 41.5 mpg (combined), it trails newer rivals.

It does, however, have decent residual values - at 41% - while it sits in group 23 for insurance, even though it doesn't feature any autonomous safety aids. You do have to pay for extras such as metallic paint, xenon lights, keyless go and a panoramic

Skoda now sells only the Plus version of the Outdoor, so although the car in these pictures is a regular Superb Estate Outdoor 4x4, there’s no visual difference – and that’s a good thing, as the chunky looks lend the car an appealingly rugged edge.

The first thing you notice is the Outdoor’s smart but stout design, which gives it an air of solidity. The Skoda’s raised ride height and matt-grey body extensions take the standard, understated, regular load-carrier and turn it into a car that looks much more suited to weekend adventures. While the changes over a regular Superb are still relatively subtle, with the contrasting colours of the bumpers, large 18-inch alloy wheels and metallic paintwork, our Outdoor test car certainly looks the part. 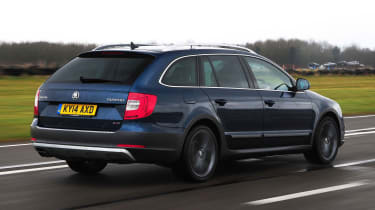 Neat details are dotted all over the Superb, from the low-down silver inserts on the front and back bumpers to the contrasting bright roof rails that mean you can fit a roof box for extra practicality. A fluted bonnet runs down into Skoda’s trademark grille, but as with the standard car, the Superb’s look has been kept relatively fuss-free with just a couple of defined creases that catch the eye.

The estate’s gentle, flowing roofline accentuates the Skoda’s length; at more than 4.8 metres long it’s a big car, but the good news is that there’s plenty of space inside. Even tall adults won’t struggle to get comfortable in the back, and with loads of legand headroom the rear compartment is larger than the already-spacious Subaru’s.

The interior layout is logical and material quality is good, although the infotainment system is now showing its age and makes the Superb feel a generation behind some newer stablemates.

As with the Subaru, the Skoda boasts a leather interior as standard, and there’s a generous level of equipment. While the Superb Outdoor is no longer available, the higher-spec Plus model is still on sale, and it comes with extra goodies such as parking sensors, cruise control, heated leather seats, sat-nav, a DAB radio and Bluetooth. Unlike the Outback, though, you’ll have to pay for metallic paint (£535), xenon headlights (£1,150) and keyless go (£400).

There’s an incredible amount of space on offer in the Superb’s load bay – 633 litres with the rear seats in place and an enormous 1,865 litres if you drop them. You get a decent amount of storage under the boot floor, too. 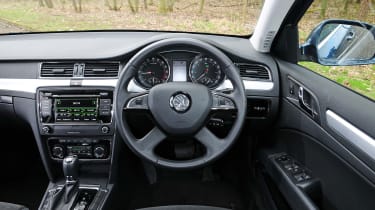 Inside, Skoda’s ‘simply clever’ storage solutions offer plenty of useful space – they include a trinket tray for mobile phones and other equipment in front of the gearlever, as well as a deep compartment between the front seats. Plus, tucked away inside each of the Superb’s rear doors is a handy umbrella.

Skoda always comes out well in our annual Driver Power owner satisfaction survey; last year it finished first. Its dealer network also impressed, with its 89.1 per cent rating good enough for fifth spot. There should be no reliability problems, either, as the Superb was voted the third best car to live with in 2014.

The Skoda should be safe, too. Euro NCAP gave the car a full five-star score when it put it through its crash tests. However, the assessment has moved on since this original rating in 2009. The car gets seven airbags, stability control and a function tohelp with hill starts as standard – but, features like autonomous braking and lane-keep assist aren’t available on the options list. 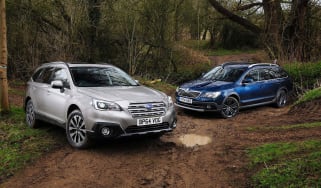 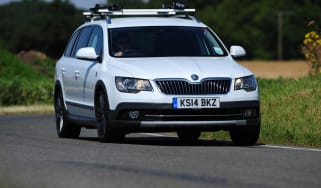 The Skoda Superb Tour De France edition is based on the Superb Outdoor, and celebrates the famous cycle race
Skip to HeaderSkip to Content