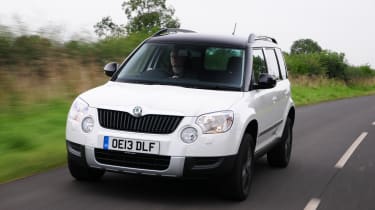 It’s all too easy to dismiss the Skoda Yeti Adventure edition as a cynical way to shift a few outdated models. But the Yeti remains a fine choice with its blend of practicality and driver appeal. The extra equipment adds value to the overall package and, although it’s not the last word in efficiency or cabin refinement, it’s great value, with a price of £21,215.

The facelifted Skoda Yeti is due by the end of the year, but as a last hurrah for the current version, Skoda has loaded a standard SE model with extra equipment and badged it the ‘Adventure’.

The company claims to have added £2,250 worth of kit for no extra cost. Goodies like a sat-nav system, Bluetooth and a DAB radio all make this Yeti a great choice for company car buyers who want to avoid being stung for options in their tax bills.

Only two versions are available, and both use a 2.0 TDI engine. The model we’re testing here is the top-spec 4x4 with 138bhp. And fortunately it’s one of the best in the entire Yeti range. Despite the tall driving position and high-riding suspension, the Yeti is really fun to drive, with excellent body control and eager throttle response.

There’s decent grip and the wide stance helps it to feel planted in tight corners or if you’re on a slippery surface. The steering is well weighted and the oily six-speed manual gearbox is pleasingly accurate.

One minor issue, though, is the refinement. Road and wind noise were a little intrusive at motorway cruising speeds. The ride is also firm for a family car, but the damping does round off major bumps and potholes. Plus, although most models will stay on the beaten track, buyers who go off road will find the ground clearance and traction make the Yeti surprisingly capable.

The interior is showing its age and feels a little utilitarian. This will be addressed in the facelift – but even though a new model’s round the corner, with a raft of kit for no extra money, this Yeti is a tempting buy.