We find out if the numbers add up for the Skoda Yeti GreenLine, the eco version of facelifted SUV 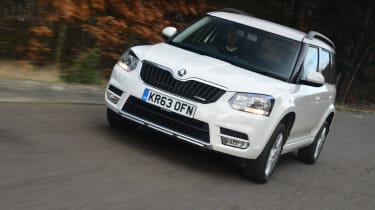 The new look of the Skoda Yeti GreenLine is smarter and the interior is a little more luxurious, but the running costs and driving experience are barely changed. While it’s still comfortable and fun, the economy and emissions are starting to lag behind newer rivals like the Nissan Qashqai. If you’re after the most efficient small SUV around, there are better options.

We've always liked the Skoda Yeti, but so far it’s struggled to compete with rivals for economy and emissions. The GreenLine is the cleanest, most efficient model in the line-up, though, and we’ve tried the newly facelifted car on UK roads.

Still, this diesel engine is impressively punchy when it needs to be, even if it sounds pretty rough under acceleration. When on a calm cruise, however, the rattly soundtrack quickly fades into the background. You’ll find there’s enough torque to overtake slower cars relatively easily, too.

The facelift brings more grown-up styling, but the Yeti’s convincing driving dynamics and practicality remain more or less untouched. The steering is light yet responsive, and coupled with the typically settled ride, it makes the car not only relaxing, but also quite fun to drive. This is a pleasant surprise, as the GreenLine badge on the gearlever suggests the focus is more on low bills than driving thrills.

The Yeti remains solidly built and clearly laid out, with just a smattering of buttons on the wheel and across the dash. It’s not particularly plush or glamorous – despite a new soft leather steering wheel – but it feels up to the challenge of a tough life.

The only real letdown is the touchscreen infotainment system and sat-nav, which is now a generation behind the latest VW Group offerings, and feels a bit slow.

When it was introduced, the Yeti was such good value and so capable that it was easy to recommend above its rivals. Four years later, models like the Nissan Qashqai and Mazda CX-5 have overtaken it, and this facelift isn’t enough to keep it in contention.

Yes, it’s well equipped and it costs £1,000 less than a Qashqai 1.5 dCi Acenta. But the Skoda isn’t the obvious choice it once was.