We sit alongside Skoda designers in latest Vision X concept car, to get a taste of upcoming small SUV 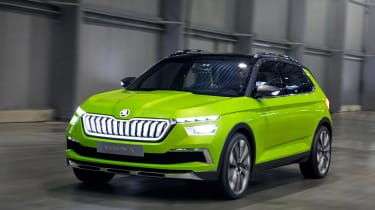 A quick drive in the Skoda Vision X gives us great insight into the firm’s upcoming small SUV. While the engineers and designers will make small tweaks to the car before it reaches production, the basic shape should remain. Of course, being a Skoda, it’ll lose none of its ‘Simply Clever’ features, meaning the cool crossover will offer form and function in equal measure.

Skoda is on a roll. Its model range is expanding quickly, with the line-up now comprising eight models – an additional 10 plug-in variants are due before 2025, too. But next in line is a new baby SUV, based on the Vision X concept, due in 2019 to sit as a rival for the Citroen C3 Aircross.

To give us a taste of what’s to come, we travelled to Skoda’s Czech HQ for a quick spin in the Geneva Motor Show concept car. While these opportunities offer little in the way of true driving impressions, it gives us chance to get up close and personal with the project and the team behind it. Catching up with designers Dalibor Pantucek and Dimitrios Darkoudis gives us a better understanding into the future styling direction for the brand, too.

Skoda historically stick fairly closely to its initial design sketches as Interior designer Darkoudis told us the concept offers a strong hint of what’s to come in 2019: “[Vision X] is not as crazy as previous concepts; the main design is more realistic than Vision E or Vision S.” 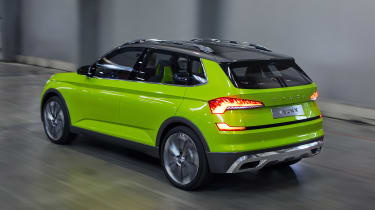 This suggests the Vision X will transition from concept car to production SUV with only a select few design tweaks. Chief exterior designer Pantucek said the rounded wheelarches will remain, despite the bigger Karoq and Kodiaq using a squarer and more angular cladding.

The Vision X’s two-tier front lighting signature is similar to that found on its SUV siblings, and is likely to be carried over wholesale. The illuminated grille will be sacrificed on production cars, not least for safety and regulatory reasons.

The split taillight design should remain, however, offering an evolutionary pattern that sets it apart from other models in the Skoda range. Pantucek said: “Imagine you are a father and you have three kids. They have the same DNA, but they are totally different.” 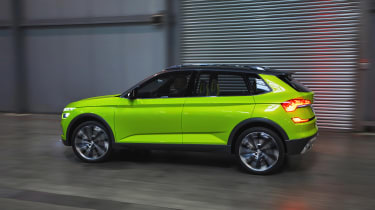 So while Skoda wants to avoid any Audi-style Russian Doll styling, both Darkoudis and Pantucek expressed their desire to stay true to Skoda’s ‘Simply Clever’ rationale, adding useful features throughout.

“We wanted to merge emotion and functionality,” Pantucek told us. “Good design is somewhere in between. Every feature has a purpose.”

The interior is filled with tech – from the large central touchscreen, to the fully digital dials. Skoda has already confirmed this set-up will appear on Octavia, Superb, Karoq and Kodiaq later this year, and the as yet un-named crossover should a similar system, too. The ambient lighting from the concept is likely to appear in the finished product as well, albeit simplified to ease production. 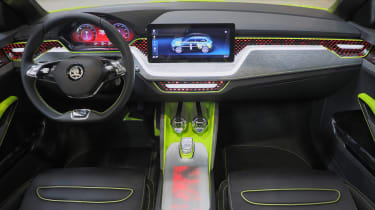 The four-seat cabin will be ditched in favour of a conventional rear bench and, the frameless doors will be replaced, too. The contrast stitching should carry over, however, with Pantucek insisting personalisation is important “on all [Skoda] cars”.

Our drive consisted of just a few laps of an empty warehouse, but it allowed us a chance to assess the car’s shape, size and practicality. The wide, squat stance gave it a planted but masculine look, though the dinky SEAT Arona-sized dimensions meant it never felt cumbersome or ungainly.

Powered by a VW Group 1.5-litre TSI engine, our car ran on compressed natural gas (CNG). While the fuel is gaining traction in Europe, it’s unlikely to be offered as an option when the crossover arrives in the UK next year. A small electric motor gave our test model a short EV range, as well as offering power to the rear axle for part-time all-wheel drive.

The showroom-ready car will be based on Skoda’s MQB platform, allowing for petrol, diesel and electrified powertrains, as well as front or four-wheel drive. Manual and auto boxes will be available. Prices are expected to start from around £16,000.