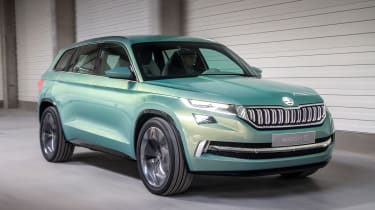 Skoda’s big SUV is heading rapidly towards UK showrooms, with a production version of the Skoda Vision S concept due in September. But now Auto Express has been behind the wheel of the show car to get an idea of what we can expect.

The Vision S will be called Kodiaq when first deliveries of the production version start next spring – the first right-hand-drive examples are due off the line in the Czech Republic in early January. It’s a five and seven-seat large SUV that has real potential to shake up its area of the market, undercutting the likes of the Hyundai Santa Fe and Kia Sorento on list price and potentially offering a bit more space than the Nissan X-Trail for roughly the same cash. 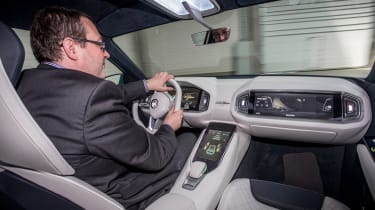 The Vision S’s exterior gives a very good guide to how the Kodiaq will look. It’s a successful attempt to blend Skoda’s existing styling cues into an SUV body shape. It lacks the cuteness of the existing Yeti, but the overall look is one of imposing sophistication – and that’s largely due to the wide front grille and the extra pair of lights which sit above the front bumper line. The distinctive Skoda bars on that grille are illuminated on the Vision S, but they’ll be chrome or gloss black on production cars.

The wheelbase is unmistakably long – longer than the recently launched SEAT Ateca, and a stretch over even the latest VW Tiguan. Well-placed sources have told Auto Express that while the Spanish offering sits on the middle length of the VW Group’s MQB chassis set-up, the big Skoda will use a much longer offering. Its wheelbase – around 2,700mm – is likely to be shared with the stretched, seven-seat Tiguan XL.

That long wheelbase means refreshingly short overhangs at the front and rear. In fact, while it’s not immediately apparent from the side profile, there’s a third row of seats that can pop up from the boot floor. The overall length is 4,700mm, the same as the Hyundai Santa Fe. 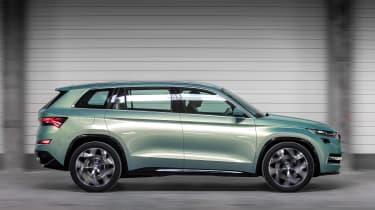 Skoda’s interior designers have taken a few more liberties when it comes to the Vision S’s cabin. It has six seats instead of seven, and instead of a conventional dashboard it has a pair of 16-inch widescreens – one for the driver and one for the front passenger. There are screens everywhere, it seems, for the front doors each contain a mobile phone and there are further mounting points in the headrests so rear-seat passengers can enjoy separate infotainment.

It’s mostly concept car fantasy, of course – a pointer, Skoda says, to how its cabins could look in five years. But the Kodiaq is likely to get the ‘two islands’ of the Vision S’s fascia, and its air-vent treatment. It could also be the first of the firm’s cars to get the VW Group’s virtual dashboard, as seen in the Audi TT and A4, as well as the Tiguan. Skoda is also working on getting elements like the ‘cracked glass’ highlights ready for production – though they’ll be some form of plastic, no doubt, instead of a expensive, heavy Bohemian crystal. 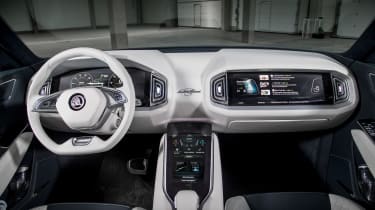 The Vision S’s powertrain is a hybrid set-up, with a pair of electric motors – one driving the rear wheels and another integrated into the car’s DSG dual-clutch transmission. It has a 1.4-litre petrol engine with 154bhp, but the total system output is 222bhp, meaning there’s enough power for the car to reach 62mph in 7.4 seconds, while emitting 45g/km of CO2.

We’re not about to push that performance envelope today, mind, because Skoda’s one-off concept is being restricted to a warehouse not far from Mlada Boleslav. The view from behind the wheel is classic SUV, though, with an elevated driving position and the Vision S’s sharp-creased bonnet falling away sharply at each corner. It’s actually quite easy to place the front wheels, which is pretty fortunate, since we don’t want a million-dollar show car to meet any of the warehouse’s free-standing pillars.

The concept’s ultra-modern seats will no doubt be replaced by something a bit plusher for production, but even so, there’s plenty of space for a six-footer; even with a full-length panoramic glass roof headroom shouldn’t be an issue. There’s decent space in the middle row of rear seats, too - and while the third row looks pretty cramped for anyone but children, that’s not really any worse than any of the Kodiaq’s likely rivals. 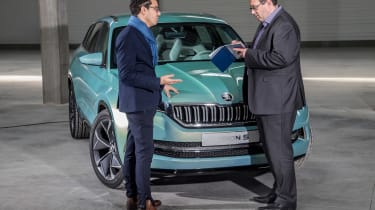 Skoda has committed to plug-in hybrid tech but it’ll arrive first in the Superb in 2019, meaning the Kodiaq will feature more familiar powertrains at launch. Expect the entry-level variant to use a 1.4-litre turbo petrol, with the bulk of the range powered by 1.6 and 2.0-litre diesels. Front and four-wheel drive will be available, while the gearboxes will be a six-speed manual and a dual-clutch automatic.

The key, as always, will be the pricing. Skoda sources have hinted that seven-seat Kodiaqs could cost as little as £23,000, which would make it considerably cheaper than the Korean opposition. That would also mean basic five-seat variants could sneak remarkably close to the £20k mark (or even slightly below it) – allowing Skoda’s offering to trump not only the new Tiguan but also push current class benchmarks like the Nissan Qashqai and Renault Kadjar on space and price.

If that all comes to fruition then there’s no doubt that the Vision S’s production successor will be a serious contender when it arrives in the UK next year. We’ve seen enough here to know that the basic dimensions and treatment are strong; now we just have to wait until this autumn to see how the Kodiaq transfers the Vision into production.

Are you looking forward to the new Skoda Kodiaq? Let us know in the comments section...