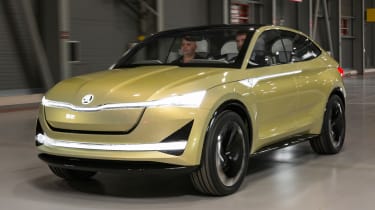 Skoda is forging ahead with its electric car plans, and after a plug-in hybrid Superb arrives in 2019 there will be an all-new model based on the VW Group’s MEB electric vehicle platform.

The Vision E concept car, show at the 2017 Frankfurt Motor Show, previews how the important new model will look. It’s the first all-electric concept car for the brand, and we’ve driven it.

Head of exterior design Karl Neuhold told us to look back at the Vision S and Vision C concept cars of the past, and the Superb and Kodiaq that they hinted at - that gives us an idea of how close this is to the eventual production car. 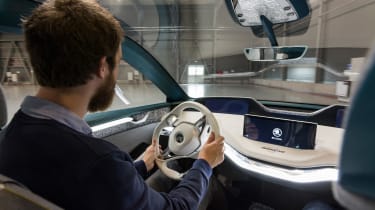 It won’t be far off, then, and after our drive we’re keen to see the real thing. The sharp Skoda lines in the bodywork are all present, along with distinctive signature light shapes - and even though there’s no grille, the front-end is clearly a Skoda.

It’s completely different on the inside, however, and here is where the concept car madness creeps in. Four individual free-standing chairs are fitted to a wooden floor, surrounded by crystals and lattice-effect trim.

There are also four main infotainment screens in what Neuhold calls “equal democracy” - everyone has their own system. “I think [the interior] has a ‘loft’ feeling,” Neuhold tells us, referring to the style of modern loft flats.

While our short indoor drive doesn’t tell us anything about the driving dynamics of the upcoming Vision E, the electric powertrain is novel for a Skoda and if the brand can recreate the spacious feel inside it will be something special.

The infotainment systems in the concept are dummy units only for show, but Skoda says the theoretical system will be controlled via gestures and voice control. There’s eye-tracking tech to help warn a distracted driver and even a heart-rate monitor to prevent accidents following a health problem. Finally there’s a slot for your phone on the door, and you can control functions like air-con or entertainment using a dedicated app.

The electric motor felt as punchy as we’ve come to expect from units in other EVs, though the 302bhp power output that Skoda claims wasn’t exactly within reach. It does hint that the production car will be pretty powerful, especially compared to traditionally-powered cars of the same size. 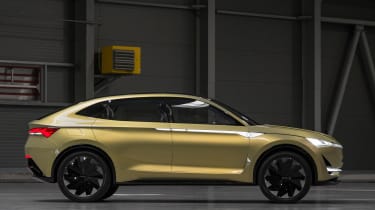 Autonomous tech isn’t the most useful inside a warehouse, but Skoda says the car will be capable of level three autonomous driving, which means it can sit in lane on the motorway and park itself safely.

Skoda claims it has a range of 500km and can be charged up inductively - using a pad on the floor, with no wires required - up to 80 per cent in just 30 minutes.

Those stats prove that Skoda is planning to offer its electric car with the kind of usability that we expect from the rest of its range - and that’s reflected in the fact that Skoda isn’t planning a sub-brand for its EVs. That’s unlike Volkswagen, which will use the I.D. branding for its first batch of electric cars.

Are you excited by Skoda's move to electrification? Let us know below...