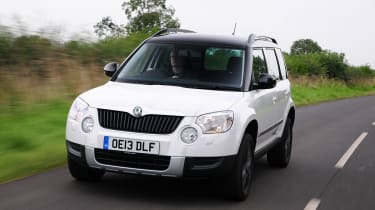 While most crossovers try to blend smooth shapes and a raised ride height, the Skoda Yeti shouts about its rugged 4x4 aspirations with a boxy body clad in chunky plastic trim.

All models handle well, but the 4x4 versions add confidence-inspiring grip to the mix, too. It’s not quite as accomplished off-road as a proper SUV, but the Yeti is good enough for most people’s needs, and is a practical choice. That boxy shape means there’s a vast 1,760 litres of space with the back seats removed. And if you go for the special-edition Adventure, you’ll get neat black detailing, too.

We even named it as our Car of the Year in 2013 when it was first launched, and readers who filled in the Driver Power survey rated it as the best car in the UK in both 2012 and 2013. Value for money and reliability are the biggest factor for the success of the Yeti - although the 4x4 version isn't as cheap as the standard front-wheel drive model.

If you're using the Skoda Yeti to go off-road, then we'd go for the 2.0-litre diesel engine with 138bhp - it's more suitable for towing, too. It gets around 45mpg and 152g/km CO2 emissions - but expect that figure to drop with off-road driving, as with every other car on this list.

The Skoda Yeti is a superb car, but it makes much more sense to go for the front-wheel drive version for most buyers - and that's why you see it at number ten in this list of the best 4x4s.