Every new brand has to keep developing to prosper. Smart is no exception 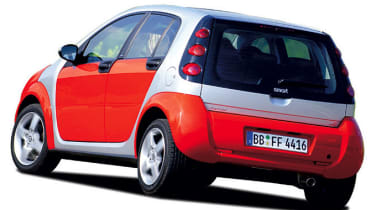 The Smart ForFour shares the visual appeal of a MINI, but does not have the same driving excitement. The manual box is fine, but the automatic is still a problem if you like a smooth gearchange. Offering a diesel will help, yet it's not the revolution hoped for.

Every new brand has to keep developing to prosper. Smart is no exception. Following its quirky debut with the ForTwo, the German maker is pushing its mature side with the ForFour - and every sensible car has a diesel option. The oil-burner is a 1.5-litre turbodiesel available with 68bhp or 95bhp. Built by Mercedes, it will also be used in the new A-Class, which we revealed in last week's issue.

Though it shares its platform with Mitsubishi's new Colt, the ForFour keeps the Smart look. Its Tridion safety cell is exposed and the rest of the bodywork is made up of brightly coloured interchangeable plastic panels. The interior has plenty of cubbies and a sliding rear seat to increase legroom or boot space, while airbags and ABS are standard.

Two gearboxes are on offer: a five-speed manual and a six-speed auto. A manual Smart goes against the grain, but it's not a bad proposition. The engine is quiet, gearchanges smooth and the car cruises along nicely. It's a different tale with the automatic. The unit is no longer sequential and, while better than the ForTwo, it's still not great.

It's a brave move to enter the supermini market. The ForFour has many of Smart's popular design ideas, but it lacks the quirkiness of the rest of the range, and faces a battle to make its mark.