This is the first-ever hot hatch to come from Smart, and Auto Express is the only British magazine to drive it 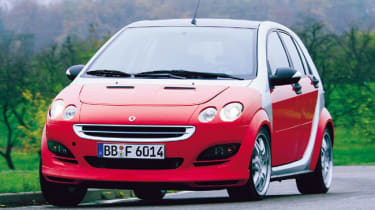 It's unlikely that this 'warm' ForFour will come to the UK, as we're waiting for the sportier Brabus model to arrive. Nonetheless, the Sport provides clues as to the styling and handling characteristics of the forthcoming variant, which will take this car's plus points and push them further.

It's the Kwik-E-Smart! This is the first-ever hot hatch to come from the German manufacturer, and Auto Express is the only British magazine to get behind the wheel. Already on sale in Europe, the ForFour Sport gives a clear indication of what next year's Smart Brabus will be like when it makes its debut in UK showrooms.

Based on the 1.5-litre ForFour, the Smart gets 17-inch alloys and a mesh front grille to distinguish it from lesser models in the range. Meanwhile at the rear, chrome-tipped exhaust pipes and a reprofiled bumper add further to the purposeful look. Inside, the seats are more supportive than on the standard car, and white-backed dials are available as an option, as is leather trim.

So, we've established that the Sport edition looks the part - but how does it perform on the road? Our test drive proved the Brabus-badged 1.5-litre engine is impressive compared with other units of similar capacity, but the power delivery isn't quite what you'd expect, given its sporting pretence.

The gearing is too tall for the car to be a rival to other hot hatches such as the Fiesta Zetec S, and while the ForFour can be hustled along quite swiftly, it never feels especially exciting. And that's a shame, because the Smart has a decent chassis. Grip levels are impressive for such a small car, helped by the wide, sticky rubber wrapped around the large-diameter Brabus alloys.

Yet you can't make the most of this traction. The steering lacks feedback, and there's little in terms of driver involvement on a winding back road. The ride is extremely harsh, and isn't helped by the 17-inch wheels, which on uneven surfaces can cause the car to vibrate quite badly. What the Sport does demonstrate, though, is that Smart is serious about entering the hot hatchback fray.

With further fine-tuning by Brabus, and an increase in power, the forthcoming performance ForFour could well be a success when it arrives in the UK.