We head to Tokyo to take a ride in the self-driving, all-electric Smart Vision EQ concept 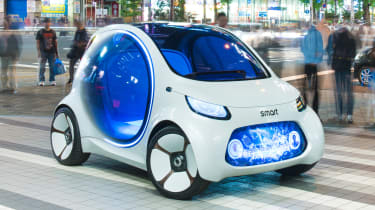 It looks like a toy, and the feeling of being driven in the Smart Vision EQ is stranger than you would have imagined. However, once you get used to it and learn to trust the technology, we’ll soon all be wondering how we lived without it.

Revealed at the Frankfurt Motor Show just two months ago, this Vision EQ bubble car is Smart’s idea of the future of urban mobility. It has an electric powertrain and a fully autonomous set-up, and is designed to cruise around cities without driver input. We’ve been to Tokyo to see what it’s like.

The glass door swings open like the front of a giant washing machine. Inside, the white sofa, blue lights and large digital display make it feel more like a spaceship than a car, a sensation enhanced by the fact there is no steering wheel or pedals. This absence of any controls makes it a fully autonomous Level 5 vehicle.

The Vision EQ won’t directly make it into production; it’s more of a preview of what we can expect from the brand during the next decade. One clever piece of tech is the ride-sharing element. The Smart gives you the option of sharing the vehicle with other people, while you can invite passengers nearby using the digital dashboard. 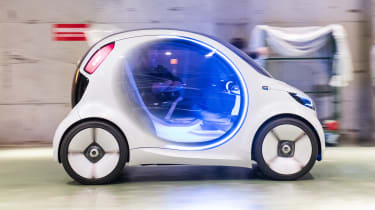 In an environment as strange and as futuristic as Tokyo, it fits in. The Smart silently whirrs across the lively and noisy area of Akihabara in centre of the city. Then, just when we’re getting more and more comfortable with the strange situation, it slowly approaches the side of the road and silently opens its doors. This isn’t because we’ve arrived at our final destination, but because the inductively charged battery has become depleted.

Smart claims the concept should be capable of around 250km (155 miles) on a single charge; in a city with traffic as dense as Tokyo’s that seems a reasonable figure considering the size of the company’s cars.

However, another advantage of an autonomous vehicle such as this is that when empty of passengers it can take itself away to be fully recharged without you having to worry about where to top it up with electricity next.