The all-electric Smart EQ ForTwo has been updated for 2020, but does its limited range hold it back? 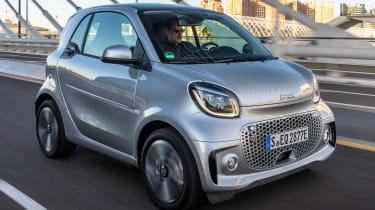 It’s hard not to be taken in by the Smart ForTwo’s charm. The unique looks and driving experience, plus the silent, darty performance of the electric powertrain mean that it has bags of character, while its manoeuvrability and tiny dimensions make it perfect for urban driving. However, its personality can only take it so far - and that’s about half the distance of a similarly-priced Skoda Citigo-e iV on a single charge. It would be a great choice as a second car specifically for urban driving, though.

The Smart EQ ForTwo is not only is it the smallest fully electric car on sale today (technically, the Renault Twizy is a quadricycle, not a car) but, given that it’s available in Cabriolet form, it’s the only open top zero-emission vehicle, too.

Here, we’re trying the fixed-roof two-door ‘Coupe’ version, which in its basic trim, and once the Government’s grant for plug-in vehicles is subtracted from the retail price, starts from £16,850. That’s within a few quid of the all-electric city cars from the VW Group: the SEAT Mii electric, the Skoda Citigo-e iV and the Volkswagen e-up!.

An electric Smart isn’t a novelty - indeed every generation of Smart has been offered in battery-powered form - but now the brand has ditched the combustion engined options all together. It’s just one step in what should be an intriguing couple of years for the brand which, now part owned by Geely, is set to release an all-new model by 2022, and expand its line-up with a supermini-sized model. 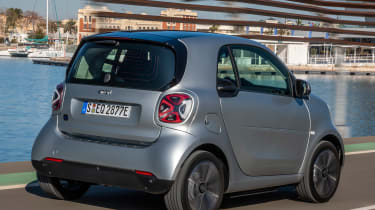 To tide the brand over until then, the range has been given a quick nip and tuck. Approach from the front, and the obvious change is the bonnet, which loses the grille design and gains a smoother, more aerodynamically efficient form. Along the sides there’s a few new wheel designs, while the back gets some new tail light graphics and a tweaked rear spoiler.

Inside, the changes are fairly subtle, with changes limited to a reshaped centre console housing a pair of cupholders and a smartphone tray. There’s a couple of new interior colours, and the fabric material covering the dash makes it feel a little more fancy inside than the city car norm of hard, scratchy plastic. A little analogue power gauge, housed in a round pod on top of the dash, adds to the sense of cuteness which just seems right for a car like this.

Less cute, however, is the infotainment system. A hangover from Smart’s joint venture with Renault, the set-up feels clunky to use and looks dated. While it gets Android Auto, there’s no Apple CarPlay either. Some of these flaws will be addressed in a few months’ time though, when a slightly larger display featuring full smartphone compatibility will be offered. 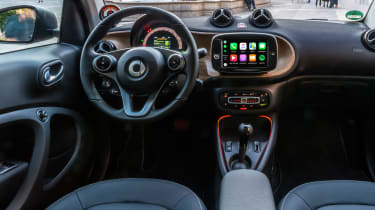 But how does it drive? Well, some cars raise a smile because they have a beautiful chassis balance, or delicate steering feel, or because they go like stink. The Smart doesn’t offer any of those things, but that doesn’t mean that it isn’t bags of fun in its own way. The ForTwo’s electric powertrain carries on unchanged in this model, so as before, a single electric motor drives the rear wheels. Officially it’ll cover the 0-62mph dash in 11.6-seconds, a figure that doesn’t do it justice.

At town speeds, the ForTwo uses its instant 160Nm of torque and light weight (1,095kg is featherweight by EV standards) to dart into gaps that the combustion predecessor would miss by a mile. The initial shove is pegged back somewhat when moving off, but given that a tiny 1.8-metre wheelbase, rearward weight bias and torquey motor sound like a prime recipe for popping a wheelie, it’s probably for the best.

Arguably the most joyous part of the drive comes with the ForTwo’s turning circle. At 6.95 metre space is all it needs to turn back on itself - less even than a London taxi. U-turns can happen wherever you want. Weaving around badly parked cars is a breeze, and parking among crowded streets is a complete doddle. The short wheelbase can cause the car to bounce around a bit, but for the most part it’s very comfortable. It’s quiet, too: indeed the most audible thing inside is the interior fan, which even in its lowest setting is annoyingly loud.

It’s certainly a car that’s limited to city driving, though. Some plug-in hybrids have a larger battery than the ForTwo EQ’s 17kWh unit these days, so the range is limited. Officially, it’ll do between 75-83 miles on a charge, which is about half that of the Skoda Citigo-e IV. Still, for the average commuter, that’s a few days’ worth of trips to work and back. 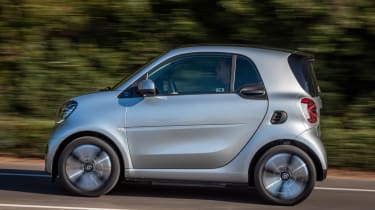 The standard 22kW on-board charger allows an 80 per cent top up in 40 minutes, or three hours and 18 minutes when using the type of 7kW charger that’s possible to have installed at home.

The four-strong trim range kicks off with the Passion Advanced, which gets standard 15-inch alloy wheels, cruise control, climate control, and parking sensors included in the £16,850 asking price. At £18,000, the Pulse Premium gains 16-inch wheels, a panoramic glass roof and a reversing camera.

For the £1,105 jump to the Prime Exclusive, buyers get LED head and tail lights, rain-sensing wipers, an auto-dimming rear-view mirror, ambient interior lighting and cornering lights. Then there’s the Edition One: from £20,645, this gets various Brabus styling add-ons, including unique wheels, a front splitter, side sills and a rear diffuser.