We see if the new Smart ForTwo's rear-engine, rear-wheel drive layout is a recipe for fun in the UK 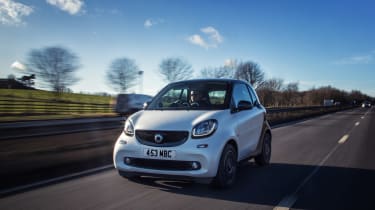 This turbocharged ForTwo is the one to go for if you ever venture out of town. It retains the standard car’s manoeuvrability and incredible turning circle, but adds that extra bit of oomph, which you’ll find invaluable on the motorway. That said, you shouldn’t be fooled by the rear-engine, rear-wheel drive setup. The Skoda Citigo and Hyundai i10 are still more fun to drive.

More than 15 years ago, Mercedes-Benz reinvented the city car with its Smart sub-brand. The dinky two-seater has since sold more than 100,000 units in the UK, with unprecedented worldwide success, too.

This year, Smart is relaunching both the ForTwo and ForFour, with its sights set firmly on the ever-expanding crop of excellent urban runarounds. The brand is so confident in its product that it insisted we tested it across some of Northern England’s most challenging roads.

Around town, the Smart excels. The super-tight turning circle is a boon – never failing to impress when negotiating tight car parks or mini roundabouts. Visibility is very good, and the short overhangs make squeezing through gaps a doddle. Smart has worked hard to ensure it’s as great in the city as it ever has been – keeping the car’s length exactly the same, while widening it ever-so-slightly to improve interior space. 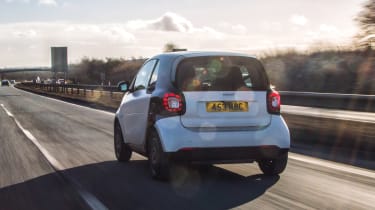 The 898cc turbo feels eager, too. While it’s hard to appreciate its benefits while pootling down to the shops, out on the open road the engine comes into its own. Where the old ForTwo required immense incline anticipation and constant monitoring of other road users, the use of a turbo ensures there’s always a lump of power waiting in reserve. It’s not what you’d call fast, but it makes the ForTwo a much more capable motorway car.

That said, it’s still enormously susceptible to crosswinds – despite all cars getting ‘Crosswind Assist’ as standard. Smart says the setup specifically brakes individual wheels to reduce the need to countersteer, but in all honesty we couldn’t notice a difference. If you spend a lot of time on the motorway, larger cars like the Ford Fiesta or Volkswagen Polo make much more sense.

We also tested the new ForTwo across the twisty and undulating North Yorkshire Moors – arguably as far from Smart’s natural habitat as sub-Saharan Africa. While it’s no sports car, this new turbo engine certainly helps when you want to hustle down a twisting B-road. The rear-engine, rear-wheel-drive setup does give a sensation of being pushed rather than pulled, but all that weight over the rear axle results in overly light steering. 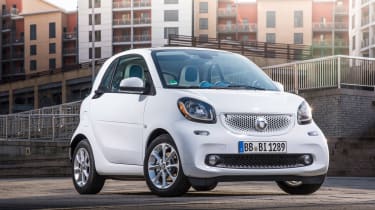 The ride isn’t bad given the tremendously short wheelbase, though the leather seats on our top-spec Prime model offered very little support. Our 100-mile test drive left us craving some bigger side bolsters, but on short journeys around town you’re unlikely to find this too much trouble. The driving position is fine, though we’d like the ability to lower the seat a bit more – but the elevated setup does give you a great view of the road.

Don’t be put off by the fact this ForTwo remains a two-seater. There’s a generous 350 litres of boot space (up from 220 litres) and if you really need to carry passengers, there’s also a new four-seat ForFour. It gets a Range Rover-style split tailgate, with extra storage in the lower door – while inside there’s a pair of cupholders and decent-sized door bins. You won’t want to use it as a tip trolley, but it’s actually a surprisingly versatile vehicle. 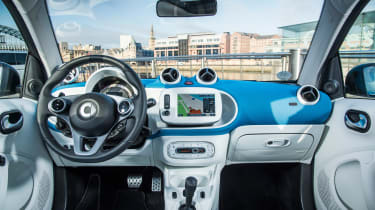 Of course, due to the car’s size, running costs shouldn’t be a problem either. The naturally-aspirated car manages almost 69mpg, while the turbo returns 67.3mpg and 97g/km CO2 emissions. The turbo version only costs £595 more, and to us is a much better purchase.

Smart thinks it’ll sell more naturally aspirated cars, but the smart money is on the turbo. It’s much more adaptable, and while most buyers will never leave the city, those that do will appreciate the car’s extra power, torque and refinement.