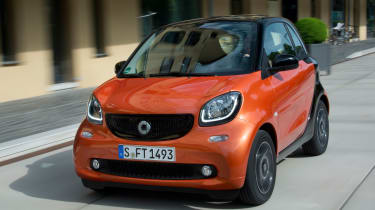 The auto gearbox may add further cost to an already pricey little car, but if you’re going to be using the ForTwo where Smart intended, it’s definitely worth stumping up the extra cash. It’s easier to live with, more engaging and far more pleasant than before. The car  isn’t without its flaws, but it’s now more polished than ever.

If you were one of the 100,000 UK buyers who shelled out on a first or second-generation Smart ForTwo, putting up with the sluggish automated manual gearbox was one of the sacrifices you had to make. Lethargic and speed-sapping, the old five-speed auto was one of the dinky car’s biggest foibles, but Smart now has the solution in the shape of a new twin-clutch transmission for the all-new model.

And at £995, it’s reasonable value – especially considering that the car will spend the majority of its time battling city congestion and contending with stop-start traffic. 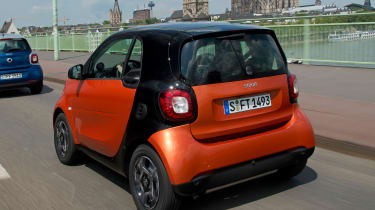 You can specify the new six-speed auto with either of the Smart’s engine options, but we drove the punchier 0.9-litre three-cylinder turbo. You only need to spend a few minutes behind the wheel to notice that the old nodding-dog effect gearchange has been eradicated. Shifts are sharp, well judged and arguably better executed than you could manage yourself with the sticky five-speed manual.

But it's not perfect. Downchanges aren’t delivered with the silky smoothness we’ve come to expect from a twin-clutch box, and the gearlever itself looks and feels cheap – like something Smart has dug out of Mercedes’ parts bin from the nineties. Steering wheel-mounted paddles add an extra level of engagement, but they’re part of an optional sports pack, which also brings 16-inch alloys, a chrome exhaust and a 10mm drop in ride height. 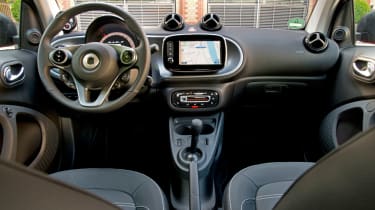 Still, this transmission provides a greater sense of maturity, plus the combination of tiny proportions, light steering and a hilariously tight turning circle means you can enjoy what would usually be an arduous battle through city centre congestion.

However, out of its city comfort zone, the ForTwo’s wheezy nature becomes apparent despite the more powerful turbo engine. Power tends to arrive in one big serving low down in the rev range, yet the swift changes from the new gearbox do mean you can flick up and down the ratios quicker and easier, allowing you to maintain greater momentum.

And don’t be fooled by its size. There may only be room for two, but a 350-litre boot and handy cubbies dotted around the cabin make the car more practical than it looks.