Adding a little more power to one of the smallest cars on sale today could have proved disastrous, but it seems like Smart has got it right 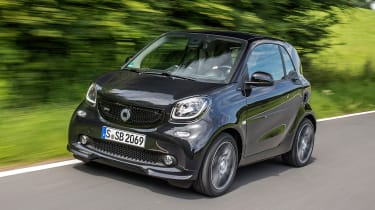 For over a decade the Brabus name on a Smart car meant little more than a lightly tweaked engine and an overactive ESP system. But now the lightweight Smart ForTwo city car can wear its badge with pride - this pocket rocket is actually surprisingly entertaining to drive. A MINI Cooper will tick more boxes for many people, but for those with no need for four seats, the Brabus ForTwo has bags of charm.

The philosophy of speed, performance and handling is part and parcel of sports car ownership. Ferrari, Porsche and Lamborghini have been nailing the formula for decades, while even the likes of Renault, Ford and Peugeot now have a credible range of hot hatchbacks. But up to now, attempts by Mercedes’ sub-brand Smart to tune its dinky city cars have somewhat missed the point. 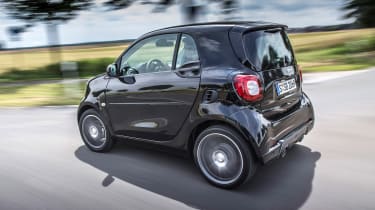 The manufacturer’s connection with Brabus stretches back as far as 2002. The German tuner fettled the original ForTwo and ForFour models with subtle engine tweaks and changes to the suspension and stability control, adding extra bodywork and sporty interior trim into the mix, too.

But the Smart Brabus cars never truly satisfied. The half-fat engines, frustrating gearboxes and hideous tendency to understeer left a sour taste, while their high list prices made the still-not-cheap MINI Cooper look like a bargain. Now there’s a new one, however, and while it’s available in all three Smart bodystyles, it’s the cheapest and fastest two-seat ForTwo we try here for the first time. 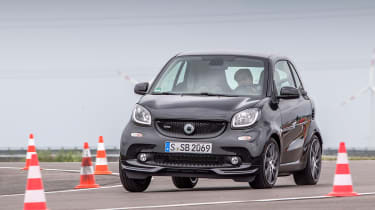 At first glance, the recipe’s unchanged. The third-generation Smart Brabus ForTwo retains the standard car’s 898cc three-cylinder turbocharged engine, albeit with power turned up from 89bhp to 108bhp. It’s got more torque, too, boosted to 170Nm – from 135Nm in the normal version.

Under the skin Smart has installed special Brabus Performance sports suspension, which is allegedly 20 per cent firmer than the standard setup. That means body roll has been reduced by nine per cent, while the ESP has been tweaked for less interruption as well.

In addition, the steering has been calibrated for what Smart calls ‘increased return torque’, allowing greater feedback when you choose to press on. The six-speed dual-clutch gearbox is 40 per cent faster, and also features a launch control-style Race Start function - not quite a must-have feature for buyers of diminutive pocket rockets such as this but full marks for attention to detail. 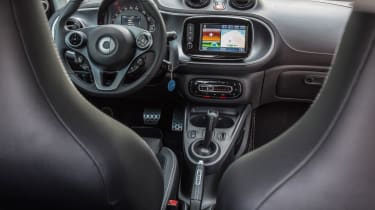 Fire it up, and there is a distinctive burble from the Brabus sports exhaust. The added character is pleasing at first, but after 20 minutes driving around town the low pitched din can get irritating. We’d be inclined to leave the stop-start system switched on, if only it wasn’t so slow to reengage when you lift off the brake.

But for zipping around the city, few cars are better than a Smart – and this Brabus version is as good as ever at squeezing through gaps and down tight side streets. The steering is quick and well weighted and throttle response is good, which in conjunction with the lightweight body means it’ll shock a few far quicker cars away from the lights. 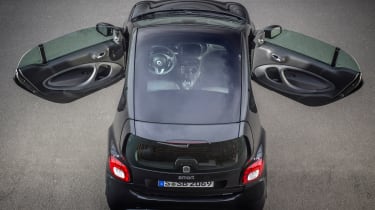 The transmission is adequate if not quite as lightning fast as we’d hope. Despite being firmer, the ride is far from uncomfortable – though that comes with the usual caveat that we need to try the car on UK roads for a definitive verdict.

And while very few will take their Brabus ForTwo on a back road blast, those that do won’t be too disappointed. On our German test route, the ForTwo impressed us with decent grip and surprisingly little body roll, combined with that peppy little engine it all served to generate big smiles.

With the gearbox in manual mode it was easy to swap a few cogs on the approach to a bend, with adequate power in reserve for a smooth shove on the exit. The ESP is still a little intrusive, and frustratingly there’s no way of disabling it – but if you modulate the throttle inputs, it still feels suitably playful on a twisting road. 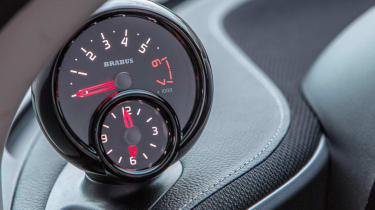 The real problems come when you look at how much it’s set to cost. Prices haven’t yet been announced, but Smart UK has hinted that an entry-level ForTwo Brabus will cost around £16,000. The ForFour will be around £1,000 more, while a ForTwo Cabrio might even nudge £19,000.

Yes, you get a matt grey rear diffuser, chrome tailpipes, 17-inch wheels and a sportier bodykit – as well as leather, a unique dash and exclusive floor mats – but for that kind of money you’re staring right in the face of the fantastic Ford Fiesta ST. That’s not to say the Brabus will cost you much to run; it can’t match the standard car’s sub-100g/km CO2 emissions, but at 102g/km, it’ll only set you back £20 per year in annual VED. Fuel economy of 62.7mpg is decent, too.