Maximum personalisation for the ForTwo... at a mighty price 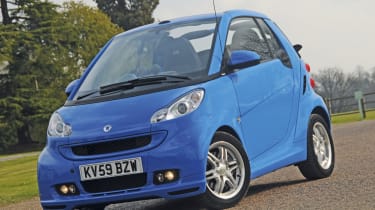 No matter how much you like the look of the Brabus Tailor Made, you’d be mad to spend £21,845 on a two-seat city car. On the plus side it’s well put together, ultra-economical and good looking, but the driving experience is seriously flawed. The demand for car customisation is growing rapidly – just ask MINI and Fiat – so you can’t blame Smart and Brabus for attempting to tap into the market. But for a handful of optional extras, the price tag is impossible to justify.

If you want a city car that stands out, then look no further! Smart has taken the customisation of its FourTwo to the extreme, by offering a luxurious Brabus Tailor Made styling pack across the range.

The idea is that drivers can shower the £11,415 cabrio with extras. These include a bodykit, 15-inch alloys, leather seats and plenty of Brabus badges. This doesn’t come cheap, though. It costs £6,950 in its most basic form, and some of the features on our car aren’t even included.

For example, a colour-coded Tridion safety cell – the part of the bodywork that normally comes in a contrasting colour – costs £2,700. Daytime running lights and ground-illuminating LEDs in the side skirts are a comparative snip at £780. According to Smart, there’s a story behind each of the 18 exterior colours. Ours was finished in Byfleet Blue, which is a nod towards the banking at the historic Brooklands circuit, and also explains the Union Jacks stitched into the headrests.

Strip away the adornments, though, and this £22,000 car loses its sparkle. Instead of the 98bhp turbo engine fitted to the ForTwo Brabus, the Tailor Made version use the standard 71bhp unit.

It has a raspy exhaust note and is willing to rev, but the semi-auto gearbox’s slow responses destroy any driving fun. Take control via the wheel-mounted paddles, and unless you lift off the throttle during shifts, the ForTwo lurches as it finds the next ratio.

It’s a shame, because there’s a lot to like about Smart. It takes a refreshing approach to personal mobility, and this Brabus pack makes it more individual than ever.