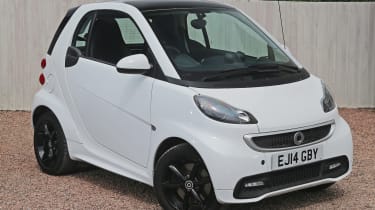 You either love or hate a Smart ForTwo. It’s easy to see why, because most Fortwo traits are either brilliant or deeply flawed. Able to accommodate unusually tall people, the ForTwo is nippy, potentially cheap to run and surprisingly practical despite its compact dimensions. It’s also very well built, but reliability is patchy. Be wary of low-mileage cars that have been used for lots of short urban journeys; these are often tired, which is why a higher-mileage car could well prove a better buy.

Mercedes took a huge gamble when it introduced the original Smart ForTwo in 1998 – and it didn’t really pay off. There was undoubtedly demand for a stylish city car and having just two seats wasn’t an issue for most people. But a high price tag, a harsh ride and a poor gearbox meant sales weren’t as strong as the firm had hoped.

So with the second-generation ForTwo, Mercedes had a chance to fix things. Trouble was, although the new version was a step forward, it shared many of the Mk1’s flaws.

Despite this, there’s plenty to like about the ForTwo Mk2; here’s how to work out if it could still be the ideal city car for you. 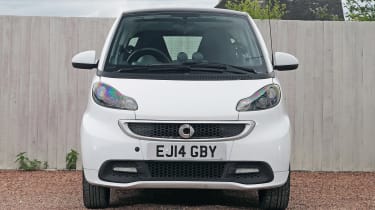 The second-generation Smart ForTwo, known as the 451, arrived in autumn 2007 in coupe and cabrio forms; its predecessor was codenamed 450.

Fitted with either a 61bhp, 71bhp or turbocharged 84bhp three-cylinder 999cc petrol engine, it came as a Pure, Pulse and Passion coupe, a Pulse or Passion cabriolet and a 98bhp Brabus coupe or cabriolet.

In June 2009 the ForTwo CDI appeared with a 45bhp 799cc diesel engine. A facelift in September 2010 meant CO2 emissions were reduced for most petrol engines, and more kit and new colours were added.

The Pure has a Softip clutchless sequential manual transmission. The Pulse gets the same gearbox but with paddleshifts as standard, while the Passion has an extra fully automatic mode called Softouch. 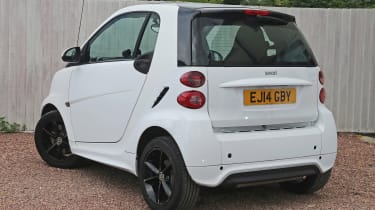 Diesel models can offer strong fuel economy on long journeys and they’re more torquey, too. The cabrio is fun but the roof mechanism can be problematic, so buy with care. The range-topping Passion is the most common ForTwo and is the one we’d go for; it’s the most generously equipped.

Alternatives to the Smart ForTwo Mk2

There are no other two-seat city cars on the market, so rivals offer more practicality in terms of extra seats and a bigger boot, even if in many cases both are cramped.

The Toyota iQ is neatly designed, comfortable and manoeuvrable, plus it’s reliable. It’s best viewed as a 3+1, though. The Fiat 500 was launched around the same time as the Smart and still looks fresh. As with the ForTwo, there are petrol or diesel engines to choose between, as well as a cabriolet option. 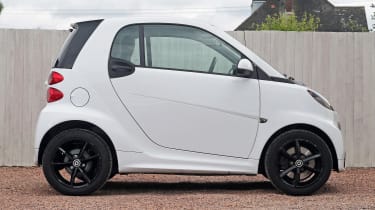 The Fiat Panda, Hyundai i10 and Kia Picanto are also worth shortlisting; they’re all top-value small five-door hatchbacks.

Heaters can blow hot air regardless of what setting you’ve chosen. The solution is a new control module, but restarting the car can fix things temporarily.

The rear window washer pipe has a habit of coming adrift, leading to leaks into the car. However, putting things right is an easy DIY fix.

Many owners are disappointed with their car’s fuel economy on short journeys. This is generally down to the engine struggling to get up to temperature.

The lock for the tailgate can fail, which means that the boot won’t latch properly. This in turn means that you can’t lock the car until the lock is sorted. 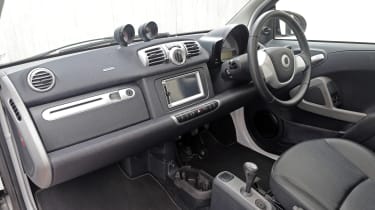 Despite the compact exterior dimensions, the ForTwo has masses of space for two, thanks to the slightly staggered seats. The cabin feels ultra-modern, too, with a quirky design and high-quality fittings. It’s strictly a two-seater and offers just 220 litres of load space (340 litres up to the roof).

The ForTwo needs to be serviced every year or 12,000 miles. Check-ups alternate between minor and major, which are priced at £190 and £290 respectively.

Because the engines are chain-driven, there’s no need to fit a new timing belt. The coolant has to be renewed every three years or 37,500 miles for the diesel engine, while the petrol unit stretches this to every four years or 50,000 miles. The cost of replacing the coolant is £116.

Brake fluid needs to be replaced every two years and the cost of this is built into the major service. These are all main dealer prices, however; you can cut your costs by having work done at an independent specialist. 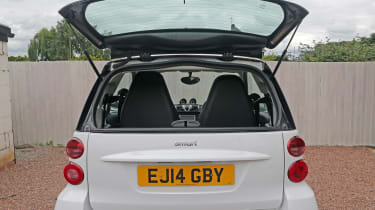 Considering the latest ForTwo (the Mk3) has had seven recalls, a total of two for the Mk2 isn’t bad. The first campaign was in January 2009 and affected 26 cars on which the windscreen could become loose, due to paint on the screen surround adhering to the bodywork. It needed a repaint and the screen rebonding.

Nearly 17,000 Smarts were affected by a September 2014 recall. An electronic heater valve could short circuit, potentially leading to a fire. A new valve solved this.

The original ForTwo peaked at 68th in our Driver Power satisfaction survey in 2006. Its successor appeared just once, in 2014, ranking only 95th due to poor scores of 100th for ride and 96th for handling and ease of driving. Fourth for running costs was the only good news; the next best was 76th for practicality.