The Smart ForTwo is one of smallest, most frugal cars on sale 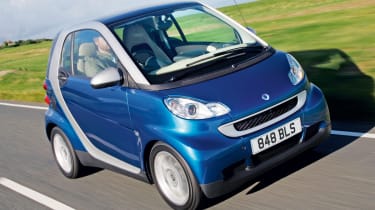 The Smart ForTwo is one of the most distinctive cars on the road thanks to its dinky dimensions and unique shape. It’s also one of the smallest cars on the road, measuring just 2.5-metres long – which makes it both incredibly impractical and very useful in the right environment. It is hopeless at carrying much more than one passenger and a small amount of shopping, and it’s really not designed to do much motorway or A-road driving. But its compact body make it a whizz about town. Few other four-wheeled machines can squeeze through tightly-packed city streets with the ease of the Smart ForTwo, and parking it is absurdly easy. It’s as wide as it is long, so it can be parked at right angles to the kerb or side-on in even the tightest of parking bays. It’s also extremely cheap to run – capable of CO2 emissions well under the 100g/km mark and economy in the 80mpg region. The gearbox is disappointingly jerky, but an all-electric Electric Drive model is available, which offers a much smoother driving experience albeit with a limited range. There’s also a cabriolet version and a sportier Brabus performance edition. But whichever version of the Smart you opt for, you’ll find it’s relatively expensive – slightly larger, more practical rivals like the Hyundai i10 and Toyota iQ have lower list prices. Both models are also more capable outside of town driving and offer better driving dynamics, too.

The Smart ForTwo is a car designed for town and city driving, so it should be no surprise that this is where it performs best. And, actually, it’s pretty nippy up to around 40mph – which is plenty fast enough for most urban use. There’s a choice of petrol, diesel and electric power. The 1.0-litre petrol unit comes with a choice of three power outputs: 71bhp (which also comes with Smart’s stop-start tech, called ‘micro hybrid drive’) a turbocharged 84bhp, or 102bhp in the flagship Brabus model. The 800cc cdi diesel unit is the slowest in the range, taking a ponderous 16.8 seconds to go from 0-62mph. While the Electric Drive model features a 74bhp electric motor and an official range of 90 miles. Power steering is optional on the ForTwo, and, without it, the steering is surprisingly heavy for such a small car, so we recommend ticking the box! Pulse models come with a self-shifting manual gearbox. The self-shifter is far smoother than the automatic, which is slow and jerky unless you back off the throttle during changes. The pick of the range is the Electric Drive model, which does without the jerky gearbox and has power steering as standard. The rapid throttle response from the electric motor’s instantaneous torque also means it feels fast off the line – and it’s accompanied by a distinctive whistle from the electric motor. With prices starting from £12,275, it’s also one of the best value electric cars on the market.

All the cars in the range perform at their best in town, and provide nippy performance up to around 40mph. Petrol versions use a 1.0-litre engine mounted in the boot, available with either 71bhp and stop and start - otherwise known as micro hybrid drive - or turbocharged to give 84bhp, or 102bhp in the flagship Brabus model. The tiny 800cc cdi diesel is the slowest, taking 16.8 seconds to reach 0-62mph. Power steering is optional on the Smart ForTwo, and without it the steering is surprisingly heavy for such a small car, so its worth taking. Pulse models come with a self-shifting manual gearbox, which is smoother than the automatic – that can be jerky and slow unless you back off the throttle during changes. The pick of the range is the Electric Drive model. This does without the jerky gearbox and has power steering as standard, while the instant throttle response means it feels fast off the line. All of this is accompanied by a distinctive whistle from the electric motor.

Whichever engine you go for, the ForTwo is fairly efficient. The diesel engine and the lowest powered petrol unit are both exempt from the Congestion Charge and road tax. The 800cc diesel engine offers the best economy – it’s capable of 86mpg and emits just 86g/km CO2. The 71bhp micro hybrid drive petrol model isn’t quite as frugal but still offers reasonable figures. It can return 65.7mpg and emits 98g/km CO2. The 84bhp petrol model is capable of 57.6mpg and 115g/km and the 102bhp Brabus edition will do 54.3mpg and 119g/km CO2. There is also the Electric Drive model, for which Smart offers a sale&care battery lease scheme that reduces the car’s list price in return for monthly payments.

The compact one-box design of the Smart is very striking, and it's an unmistakable sight on the roads. The contrasting roofline sweeps down into the side sills, and the tall shape actually means visibility is better than you'd expect. Three trims levels are offered, but all get alloys wheels as standard. The performance-oriented Brabus edition also gets a set of twin-exhausts and a mesh grille up front. Inside, entry-level Pulse models feel a little basic, with functional plastics on all the main surfaces. Mid-spec Passion trim adds leather to the steering wheel and gearknob, but can be had only with an automatic gearbox. Electric drive models can be specified with a white and green colour scheme to shout about its electric power.

Despite its incredibly short length, the ForTwo offers more boot space than much bigger four-seat rivals. The 220-litre boot is bigger for instance than both the MINI hatchback and the Fiat 500. If you fill the stubby boot to the roof, it offers as much as 340-litres, but the shortness of the loading bay limits the type of objects you can carry. Handily, the split tailgate opens out into a bench seat, and can be used to carry odds and ends – it houses the charging lead on the Electric Drive model – while the passenger seat back folds down too. The Electric Drive has the same amount of space as the standard car.

The Smart ForTwo hasn’t been crash tested by Euro NCAP since 2007, when it was awarded four stars for adult occupant protection and two stars for pedestrian protection. Since the ForTwo was tested, Euro NCAP has made its crash tests a lot stricter and introduced more testing criteria, so it’s difficult to compare the little city car to rivals, but it is likely that more modern rivals that have received four or five star crash tests in the last few years are safer. Traction control and driver and passenger airbags come as standard, as does the electronic stability programme, but side impact airbags are an optional extra. While there were some electrical problems reported with earlier models, no major problems have been reported on the current crop of cars. However, Smart came last out of 32 manufacturers in our 2013 Driver Power satisfaction survey, so owners clearly haven’t been too impressed with their vehicles. If you buy an Electric Drive model and opt for sale&care, the battery capacity is guaranteed for the duration of the battery lease.