Smart's ForTwo city car is an obvious candidate to thrive with electric power but what's the truth? We test the ForTwo Electric Drive 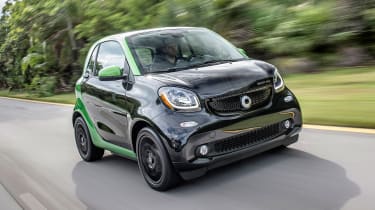 If you plan to use the tiny ForTwo as Smart intended – in a city – then the new Electric Drive model could well be the one to go for. For the first time, it’s available as a more practical four-seat ForFour, too. A 100-mile range is acceptable enough for a city runabout, and an impressive 2.5-hour charging time means you won’t be hamstrung by lengthy periods plugged into the mains. Trouble is, if you’re interested, you’ll have to wait until next summer to get your hands on one. And at around £16,000, it won’t be cheap, either.

Head to any motor show – or showroom for that matter – and the number of new electric cars on display is greater than ever before. The trend for battery-powered runarounds shows no sign of letting up, either, as Audi, VW and even Jaguar race to offer zero-emission transport. But given the volume of newcomers, it’s all too easy to forget about those who’ve been doing it for years – like Smart.

The pocket-sized ForTwo Electric Drive has been around for almost a decade, and the car you see here is the all-new fourth-generation model. There are improvements across the board – on paper at least – over the model it replaces. The range is up from 90 miles to around 100, while charging times have almost halved to 2.5 hours from a fast-charging point.

There’s more power, too. The Electric Drive uses a 17.6kWh lithium-ion battery and an 81bhp electric motor, which may not sound like much, but as it weighs in at just over 1,000kg, there isn’t much to move around. And if you’re going to be using the car in the city where it has been designed and developed, you probably won’t be going that far either, so 100 miles of range should do the job. 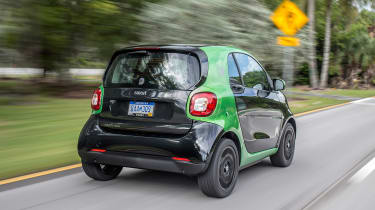 As the Electric Drive is based on the latest-generation ForTwo, the interior is now a far more habitable place to spend time. There’s a decent seven-inch infotainment system with navigation, as well as softer plastics and more cubbies for odds and ends. Those inside are no longer crammed in shoulder-to-shoulder, either, as the new model is 110mm wider than before.

It may only have 81bhp and 160Nm of torque at its disposal, but the ForTwo ED has a decent turn of pace from a standstill. Smart claims 0-62mph in 11.5 seconds – about what you’d expect from a modestly powered family hatchback – but the way it scampers up to 40mph means it has a handy advantage in busy city traffic.

It’s incredibly nimble, too, thanks to the quick steering and 6.95m turning circle – the smallest of any car on sale. But it’s worth noting that the combination of snappy acceleration and alert steering can make it feel nervous if you have to make a sudden change of direction.

A single fixed-gear ratio also means smooth and effortless progress that isn’t disrupted by the lurching gearchanges of the standard model. The ED’s zippy nature and refined powertrain make it the most entertaining Smart to drive. 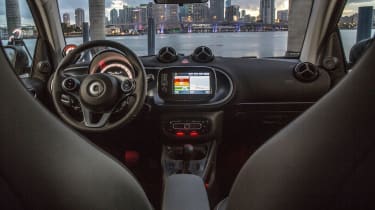 Unsurprisingly, take the ForTwo ED out of its comfort zone and things don’t go so well. Faster A-roads will deplete the battery and refinement takes a hit with noticeable wind noise and tyre roar. However, driving like this is like seeing your child do well at a school sports day and deciding to cart them off to compete in the Olympics – it’s not really made for wider roads or motorways.

Like the standard car, the Electric Drive also benefits from a more sophisticated suspension set-up than before. It’s less troubled by pitted city streets and far more compliant on the move. The faint whirr of the electric motor is all you can really hear in town. There’s even an acoustic warning for pedestrians – the sound generator fitted on the front grille increases the pitch and volume in line with the speed. You can, however, switch it off completely if you wish. 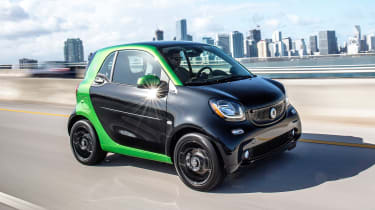 Official pricing and specs are yet to be announced, as the ForTwo ED won’t arrive in the UK until next September. There’s likely to be only one trim on offer, with kit such as heated leather seats and sat-nav thrown in. Over a similarly specced petrol version, the ED should command a premium of around £2,000. For the first time, Smart has also launched an ED version of the ForFour if you need more space, while a Cabrio model allows zero-emission motoring for those who like the wind in their hair.