All-new version of the Subaru BRZ sports car launched – but, sadly, it won’t be sold in the UK 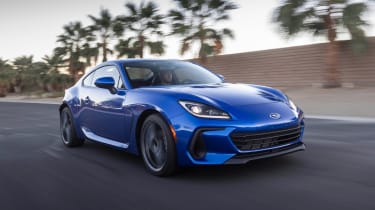 It goes on sale in Japan and the United States this time next year, but Subaru has confirmed that the next-generation model won’t be sold in the UK. Instead, British buyers will be serviced by the upcoming Mk2 version of the Toyota GT86, which will be a badge engineered version of the car possibly with a different engine.

The new Subaru BRZ follows a clear design evolution over the previous-generation car. This new model retains the same basic silhouette, but features a more chiselled front end, thinner headlights and a restyled rear bumper. There’s also a more sculpted bonnet – and the car’s side-skirts have sprouted a new pair of vents behind the front wheels.

Some elements of the original car have been transferred onto this new model intact, though. There’s a similar double-bubble roof, while the rear diffuser – complete with its central foglamp and twin-exit exhaust system – looks pretty much identical to the old car’s. Depending on the trim-level, buyers will also get either 17 or 18-inch alloy wheels.

Subaru’s styling changes serve more than a purely cosmetic purpose, though. Now, the roof, front wings and bonnet are all made from lightweight aluminium – and the larger alloy wheels are compatible with Michelin Pilot Sport tyres, which promise to deliver a little extra grip.

The cabin has been given a similarly extensive overhaul. The old car’s analogue gauge cluster has been swapped for a seven-inch digital unit – and there’s a new eight-inch infotainment system mounted in the centre of the dashboard. Like the old model, buyers also get a pair of well-bolstered sports seats, a sports steering wheel and a aluminium pedal box.

Subaru says it has also improved the BRZ’s chassis, fitting strengthening panels to the car’s inner frame and with stronger bonding techniques. What’s more, the new body shell is around 50 percent stiffer than the old car’s, which the firm’s engineers say has benefitted the car’s steering response and handling.

To complement the stiffer chassis, and remedy one of the main complaints of the previous generation model, Subaru has bolted a more powerful engine under the BRZ’s bonnet. It’s a naturally aspirated 2.4-litre four-cylinder boxer engine, which develops 228bhp and 249Nm of torque – 31bhp and 44Nm more than the outgoing model.

Subaru has also stuck by the old car’s front-engined, rear-drive formula – and buyers still have their choice of either a six-speed manual gearbox or a six-speed automatic.

The new BRZ/GT86 duo won’t be the only project to come from Toyota and Subaru’s joint venture. The pair recently agreed to co-develop a new all-wheel drive battery-electric SUV, tasked with rivalling the likes of Volkswagen ID.4 and Tesla Model Y.

The brands stated that both of these business arrangements will further “develop and strengthen” their long-term partnership. Toyota has also increased its stake in Subaru by 3.17 per cent, upping its overall ownership of the brand to 20 per cent.

Are you excited for the second-generation Subaru BRZ? Let us know in the comments section below…