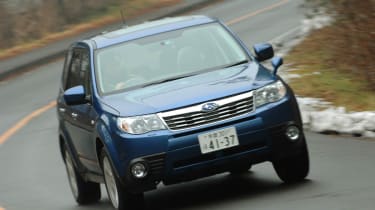 Compared to the outgoing model, the new Forester is a definite step upmarket, and it will appeal to more buyers as a result. It’s not only better looking, but also has loads more space and drives very well. There are still some rough edges – for example, the interior trails the class leaders by a long way. While lesser versions aren’t likely to be as much fun as this turbocharged performance model, they should offer a better all-round experience for UK buyers – particularly the diesel.

It’s all change for the Forester. Sub­aru’s four-wheel-drive family favourite is best known as a boxy estate – but not any more...

The new car has dumped its predecessor’s look for a larger, SUV-style body, and it has Toyota’s RAV4 and the Honda CR-V in its sights.

On sale in April, it’s taller and bigger all-round, and will come with a choice of 2.0-litre boxer engines: one normally aspir­ated and one turbo. The all-new 2.0-litre boxer turbo­diesel is due to join the line-up early in 2009.

There’s also a revamped interior which has much more space, as well as a chassis that’s shared with the lat­est Impreza. It promises to appeal to a wider range of buyers than before, but the big question is whether it’s as good as its class rivals. Well, details such as the Impreza-style headlights and a wide grille combine well with the chunky lines, raised ride height and bold bum­per protector to provide the newcomer with a muscular look.

As it’s 75mm longer, 45mm wider and 110mm higher than before, and the wheelbase has been stretched by 90mm, it’s a lot more roomy inside. Occupants in both the front and rear benefit from loads of head and leg space, while the boot is large, too.

Unfortunately, as in the Impreza, the cockpit hasn’t seen a huge leap forward in terms of quality. The plastics simply aren’t up to class standards. Still, the driving position is good and the seats are very comfortable.

Under the skin, the Forester gets the Japanese manufacturer’s symmet­rical four-wheel-drive system. What’s more, the new model borrows its plat­form and double-wishbone suspen­sion layout from the Impreza.

While the normally aspirated car delivers 146bhp, the top-of-the-range turbo model we tried has 227bhp. It gets Subaru’s SI-Drive, which gives drivers a choice of three throttle settings. There’s also variable dynamics control, which assists the 4WD by regulating engine torque and the brakes to ensure that the maximum grip is provided at all times.

These innovations work in tandem with the new suspension – as well as a wider track and wider tyres – to give plenty of traction. Add in impressive ground clearance, and the Forester is capable of mild off-roading.

Yet whatever the terrain, the 2.0-litre boxer turbo is a strong performer. There’s significant urge from low revs, no turbo lag and great acceleration right up to 6,000rpm. It’s smooth and refined, too. However, while there are no official figures yet, this unit’s CO2 emissions are likely to be high.

Even though the latest Forester is still behind the times in this class, it’s an interesting proposition, and a big improvement over the car it replaces. It’s not likely to worry either Toyota or Honda too much, but in 2.0-litre turbodiesel guise, it would be a practical and capable machine.