The new Suzuki Swift is available with four-wheel-drive - a unique selling-point in the supermini sector - but is it worth the extra cost? 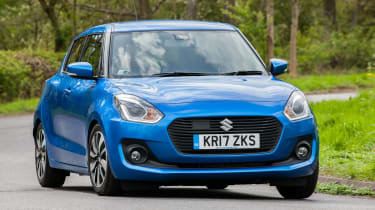 The latest Suzuki Swift is a likeable, lightweight, stylish and fun-to-drive supermini, but this spec doesn’t show it off in its best light. The 1.2-litre engine isn’t as punchy or refined as the 1.0-litre turbo, while the all-wheel drive system doesn’t add much to the package except cost and weight. As is common with Suzuki, cheaper variants hold more appeal, allowing you to quickly forgive the unsettled ride and cheaper cabin materials.

The all-new Suzuki Swift hits showrooms next month, and the Japanese carmaker has some ambitious targets planned for it. Swift sales in the UK peaked at 15,000 cars in 2007, but last year the brand’s second best seller managed just 11,000 units. The target for Suzuki is to double that by next year, meaning the new Swift has a lot of responsibility on its shoulders.

That last feature gives the Swift a unique selling point in the supermini market. Previously, if you wanted all-wheel drive in a small city-friendly package, you’d have to look towards cars like the Fiat Panda 4x4, or pricier crossovers such as the Nissan Juke. Choosing ALLGRIP demands some compromises, though; not least because it’s only available in top-spec trim with the 1.2 petrol engine – commanding a £1,000 premium over a similarly equipped 1.0-litre.

It’s also thirstier than the front-wheel-drive model, although perhaps less so than you might think. The 4x4’s 62.8mpg plays the standard car’s 65.7mpg, while the ALLGRIP model emits just 3g/km more CO2 – meaning just £20 extra to pay for the first-year road tax. That’ll be a boon for many buyers, and comes as a result of Suzuki’s pathological quest for lightness; the base models weighs just 890kg, while even our fully-loaded four-wheel-drive test car tips the scales at 980kg. Most superminis tip the scales at more than 1,000kg in their lightest form.

You can really feel the lack of bulk on the road, as even with our 1.2’s modest power and torque figures the Swift delivers better pace than the figures suggest. However, you need to work it far harder than you do the Boosterjet – and while that’s no hardship thanks to the slick gearshift, it‘s less relaxing than you’d find the same task in a Volkswagen Polo, for example. Refinement suffers, too, with a vocal four-pot drone penetrating the cabin at higher revs. The 1.0-litre is both quieter and far more characterful to the ear. 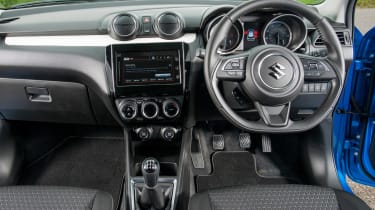 As before, the SHVS system is barely noticeable in its operation, though, with the integrated starter generator allowing smooth and silent restarts when pulling away. The clever setup also offers a bit of electrical assistance under acceleration.

Our test route didn’t involve any off-roading – and given the lack of ground clearance, we doubt the Swift would be much cop. However, the ALLGRIP system did add confidence in rainy conditions, helping to quell understeer in quick cornering. Most people wouldn’t really notice the difference in normal driving, though.

Regardless, the Swift remains agile and fun to drive, with decent body control and positive steering. It’s just a shame that Suzuki has prioritised handling over ride comfort, as it appears fidgety over small imperfections and often caught out by big bumps. Road noise is noticeable, too, as kerbweight targets mean sound insulation isn’t as extensive as rivals. 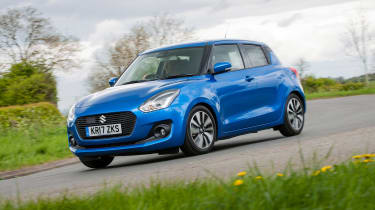 We reckon mid-spec SZ-T with the 1.0-litre turbo is the pick of the range, with pretty much all of the essential kit included without the price edging closer to larger superminis with plusher interiors - the Swift's dash design looks okay to the eye, but the plastics are dark, universally hard and scratchy. Regardless of whether it has sat-nav (only in SZ-5 spec) or not, the touchscreen infotainment system is feature-packed but fiddly, and the graphics look dated.

Passenger space is greatly improved over the old car, though, with good head and leg room in the rear for a couple of six footers to manage short journeys without complaint. The boot is bigger, too, although at 265 litres it’s still some way behind the class best.