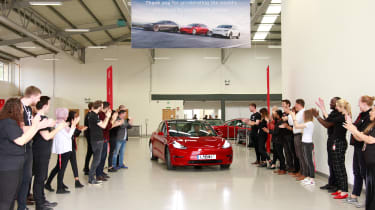 Tesla has revealed that its new BMW 3 Series rival, the Tesla Model 3, will spawn a number of derivatives that could include an SUV and an estate in order to attract a broader spread of customers.

British-born Chris Porritt, Tesla’s vice president for engineering, told us the new small Tesla – expected to be revealed in 2016 for a 2017 launch, and hinted at in our exclusive images – is still in the early stages of development and that nothing is being ruled out.

“We don’t know what type of customer we’re trying to appeal to yet, but we want to speak to more customers… Lots of them!” he said. “We’ve got specific customers for Model S, we have an idea with Model X, but we need to appeal to more people with Model III. 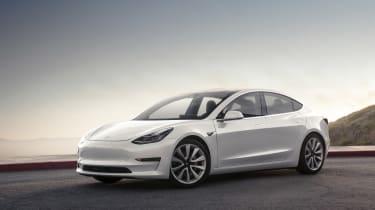 Achieving pricing targets will be crucial for the Model III, and Tesla’s future as a whole, Porritt explained: “The type of technology we have now is quite expensive. To enable us to sell Model III for a more cost-effective price, we need to take the  cost of building it down as well.

“We’ve got to be more efficient in the way we build it and we will have to use more cost-effective materials and/or be cleverer with the materials we use.”

A new Gigafactory, based just outside Reno in Nevada, will allow Tesla to mass produce batteries at a cheaper rate, but maintain the extended range for which the larger, 5 Series-rivalling Model S has become famous. Expect a range of between 200 and 300 miles for the Model III compact electric saloon, while Tesla is aiming for a total volume of “well over 200,000 a year”. 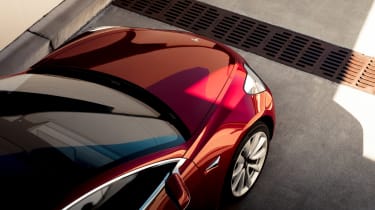 Beyond the Model III, Porritt was coy about a new sports car to replace the Tesla Roadster, but he didn’t rule it out. “We may do a Roadster or a sports car again, but at the moment we are on a trajectory to get more volume rather than focus on a specialist product,” he said.

Find out about the best electric cars you can buy now in our round-up story.

The American EV manufacturer is preparing to build a new UK energy company, based on the battery technology used in its electric vehicles
Visit Tesla is the most valuable US car maker of all time

Tesla's market capitalisation of $81.39bn sees it surpass Ford’s record from 1999, now worth nearly as much as Ford and GM combined
Visit Tesla’s new low-cost, long-life battery set for 2021 launch