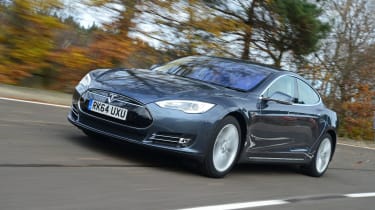 The Model S’s refinement, performance and practicality always impress. A more forgiving set-up and accessible price point make this 60kWh version a more obtainable real-world prospect than the flagship. But only with a more comprehensive recharging infrastructure will it be described as faultless.

Until Tesla’s Model X arrives next year, and the all-electric Model 3 3 Series rival appears in 2017, the 60kWh version of its Model S is the entry point into ownership. At £50,335 after the Government grant, it costs £19,000 less than the flagship P85+. So, what does the base Model S miss out on?

Well, not much. The main difference lies beneath its floor, with a less powerful 298bhp electric motor (the flagship boasts 410bhp) and a smaller battery pack, dropping the range from 310 miles to a still impressive 215 miles.

Performance will rival a Porsche Boxster. You don’t even have to fumble about with keys or starter buttons, as the Model S detects your presence and turns itself on. Simply select drive, gently squeeze the throttle and the Tesla swiftly glides away. Floor it and you’ll get from 0-62mph in 5.9 seconds, but it feels infinitely quicker as there’s no delay whatsoever in the power delivery. 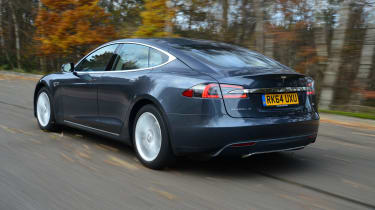 Perhaps even more impressive is the Tesla’s overtaking ability. It’s perfect for joining a motorway or passing dawdling motorists, with the instant hit of torque propelling you forward.

Ease off and the Model S transforms itself into an effortlessly compliant and relaxing cruiser. The 60kWh car comes as standard with 19-inch wheels, whereas the P85+ wears enormous 21-inch alloys and skinnier rubber.

Also helping soak up rutted British roads is more traditional mechanical suspension, as opposed to the air-sprung set-up in the P85+. It simply glides over surfaces the performance model would fidget and fight against. 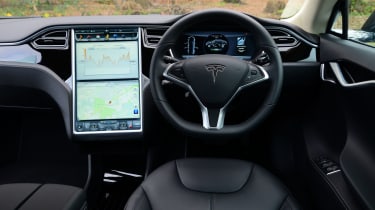 Show it some twisty back roads and body control is well managed, aided by the 100kg weight reduction the smaller battery brings about. It’s still not the most agile car – it’s marketed as a luxurious electric cruiser more than a tantalising sports car – but it holds its own. Just don’t expect to achieve the full 215-mile range with a heavy right foot.

While the range will satisfy most buyers’ daily needs, recharging remains an issue. From a standard household power source, a top-up is delivered at only five miles per hour. That’ll take a mammoth 43 hours, although more efficient wall-box chargers are available.