Despite the recent recall media frenzy, our hatch has been problem-free. 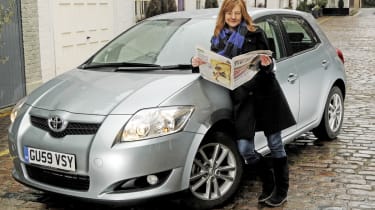 It's hard to avoid Toyota at the moment. Every time I pick up a newspaper I read another story about the company’s recent problems.

A recall to fix faulty accelerator pedals on a variety of models was quickly followed by a safety campaign on the Prius to improve the hybrid’s brakes. All of this is taking its toll on the Japanese company’s proud reputation for reliability – but after living with our long-term Auris for the past three-and-a-half months, I’m happy not to add more fuel to the fire.

Our 1.33 TR is one of the cars affected by the accelerator pedal safety recall, announced on 1 February. Yet there are no signs of any problems to come, with none of the stickiness reported by some owners.

In fact, I’ve encountered very few issues with our Auris. It is smooth to drive and comfortable on long journeys, while the compact proportions make it perfect for the cut and thrust of my urban commute. The daily trawl to the Auto Express office provides me with plenty of opportunities to put the car’s eco credentials to the test, too. I’ve been keen to make the most of the Toyota’s stop-start system, as most of my miles are clocked up driving around central London. I had expected the Auris to make a real difference to my emissions, as well as my fuel bills.

Unfortunately, the winter’s freezing conditions have hit my eco-friendly driving, as the system doesn’t work in really cold weather. At anything below about four degrees Celsius, the engine keeps running – even at a standstill. Despite this, according to the car’s trip computer, my eco record – the total time the engine has been switched off – currently stands at seven seconds short of 14 hours. What a sad reflection of the amount of time I have to spend in city traffic jams!

Even with all of this trickery, however, the Toyota still struggles at the pumps. So while I’ve got no complaints about the recent accelerator recall, I’m actually quite disappointed with my economy, which currently averages only 30.4mpg. It’s all rather academic now, though, as GU59 VSY will soon be going back to its maker for good... It is to be replaced by a facelifted Auris, this time in more powerful 1.6 SR trim.

Before you ask, I’ve no qualms about running another Toyota, just as long as the firm doesn’t change one thing – its reliability.

“The model may have been subject to a recall, but after only a short drive in our Auris I thought that the build quality felt impeccable. The sole problem I encountered was down to the thick A-pillars, which I found sometimes hampered my visibility when pulling out of a junction.”