The Aygo has been facelifted for 2012, so can it compete with its more modern city car rivals? 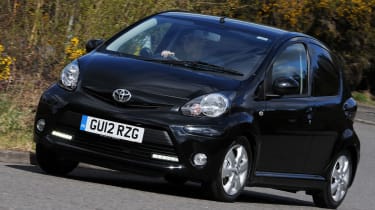 When Citroen and Peugeot facelifted the C1 and 107 respectively, they dropped their starting prices to match the Volkswagen up!. Toyota hasn’t done that with the Aygo. The car’s not as well equipped, nor does it drive as well as newer rivals, so it fails to offer the best value for money. We would expect it to struggle in the sales charts.

Advertisement - Article continues below
Competition has never been hotter in the city car category thanks to the arrival of the brilliant Volkswagen up!, so where will the newly revised Aygo sit in the pecking order?
One look at the price list tells you the little Toyota isn’t off to a good start. The range’s entry-level car is £8,535 – nearly £500 more than the up!. That’s not very impressive when you consider the Aygo’s sister cars – the Citroen C1 and Peugeot 107 – have also had updates recently, yet are still priced the same as the VW.
Changes to the Aygo include a minor facelift and engine tweaks that have lowered running costs. There’s also a new trim, Fire, which we’ve tested here. It includes body-coloured side mouldings, LED running lights and tinted rear windows, but costs a hefty £9,990 in five-door form.
Advertisement
Advertisement - Article continues below

The 67bhp 1.0-litre three-cylinder petrol engine has had its CO2 emissions reduced from 103g/km to 99g/km, making it road tax exempt. Fuel economy is up to 65.7mpg from 61mpg. But with a 0-62mph of 14.2 seconds, the car feels sluggish accelerating up to motorway speeds.
What’s worse, there’s lots of wind and road noise at the national limit – you have to really shout at your passenger if you want to have a conversation.
On the plus side, revised shock absorbers help make the Aygo a little more grown-up and secure on the road, while the quick and responsive steering allows some driving pleasure.
At £9,990, though, you might expect air-conditioning as standard – the cheaper up! and Hyundai i10 both offer it – but
on the Toyota it’s a £500 option.
This round of updates means the Aygo is cheaper to run, but it feels outdated when compared with modern city car rivals such as the up!. If it was cheaper and better equipped, it could be recommended, but as it stands, there are far better value city cars on the market these days.
Advertisement
Share this on TwitterShare this on FacebookEmail
Advertisement