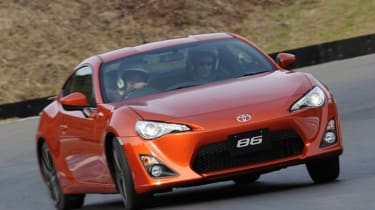 The new Toyota GT 86 is not just a fun, rear-drive coupe powered by a charismatic boxer engine. This joint venture with Subaru has added a great, fun car to Toyota’s range while injecting some rear-drive spice and variety to Subaru’s AWD line-up. But more so than that, these two cars will make the world stand up and take notice that Japan has not forgotten how to make a great driver’s car that looks the part, and doesn't break the bank in the process.

The new Toyota GT 86 is here – and Auto Express has driven it. First revealed at the Tokyo Motor Show back in 2009, the rear-wheel-drive coupe has been tweaked and developed ever since, and now it's finally arrived. Does it inject some excitement back into the Toyota brand and give the company a cut-price Porsche Cayman rival?
Few cars are accorded such lavish unveilings. In fact, few cars are worthy of such exaltation. The Toyota GT 86 is one of those cars. In front of an estimated 20,000 screaming fans at Fuji Speedway, 60 miles south of Tokyo, Toyota CEO Akio Toyoda drove the sharp-looking GT 86 down the mile-long straightaway, passed a dozen high-profile Toyota and Lexus race cars parked on the grid, and pulled up in front of the world’s media before announcing the all-new model.
As he apologised for keeping the motoring public waiting for the car’s launch, he said, “All car lovers have been waiting for this kind of car.” Known for his hands-on developmental work and stints behind the wheel of the Lexus LFA in the Nurburgring 24 Hour race, Toyoda poured his heart out to the expectant crowd. “For the last 10 years, I have been a part of the development of this car, so I really feel like my baby is coming out.”
Gone is the concept car’s name FT-86, replaced by GT 86. With design inspired by the Toyota 2000GT from the sixties and more recently, the early eighties rear-wheel drive drifting sensation Corolla Levin AE86, from which the GT 86 takes its name, the new coupe was borne out of an intriguing joint development project between Toyota and Subaru.
The GT 86’s exterior styling and product planning was taken care of by Toyota, while Subaru supplied most of the parts – chassis, engine, transmission, brakes and suspension - that make the car so much fun to drive. Toyota offered their D4-S direct injection engine technology that makes Subaru’s revised 2.0-litre boxer engine cleaner and more fuel efficient. Generating 197bhp at 7,000rpm and 205Nm of torque at 6,600rpm, the GT 86 gets around 30bhp more than the Mazda MX-5, its main Japanese rival.
The secret to the Toyota’s driver thrills lie in the world-first rear-wheel drive boxer engine layout, with a choice of Subaru Impreza-inspired six-speed manual or six-speed automatic gearboxes with steering wheel paddles. The GT 86 is a two-plus-two, but don’t expect to get anyone over 170cm in the back seat. Meanwhile the driver’s seat will swallow up drivers clearing 190cm with no problem. Front seats are supportive and comfortable, pedal positions are perfectly set, and visibility is good all round.
Taking off on our allotted three test laps of the short course at Fuji Speedway, we are delighted to hear and feel a strong Subaru flavour burbling its way through the cabin. Its naturally aspirated four-cylinder engine delivers lots of torque through the bottom to mid-range, but could use a bit more punch at the top end.  The GT 86 feels light on the tarmac, and its ride is firm but not harsh. Turn-in is sharp and pinpoint and body roll minimal, given the engine’s low centre of gravity. Grip levels are higher than expected with a slight tendency to understeer.
Developed to be a reasonably priced sports coupe with serious ‘drifting’ and racing capabilities, we decide to switch off the VSC and traction control to see what happens. After dabbing the firm disc brakes to tuck the nose into a tight left-hander while holding 5,000rpm in 2nd, the initial hint of understeer is replaced by a welcome dose of oversteer that's easily controlled with opposite lock.
Toyota discussed at length its (and Subaru’s) decision to build a lightweight sports car that avoided AWD, turbos and high grip tyres. The end result is a stunning first step, that’s for sure. This car is a blast to drive and will without doubt inject some much-needed adrenalin to a lacklustre line-up. But we can’t help think that enthusiasts and tuners around the world will want more power – and very soon - leading to bolted on turbos. Why? Because the chassis can certainly take it.
Share this on TwitterShare this on FacebookEmail