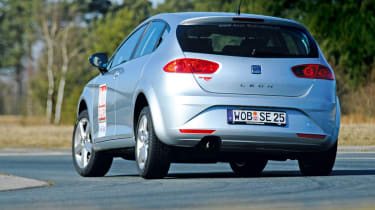 The Vier is a long way off the performance of both all-season and winter tyres. Like the Nankang, it was much better than the summer tyre, but a long way behind the best.

Based on its dislike for snow, we thought it was closer to a summer tyre and would fare better on wet and dry roads. But this never materialised. It felt pretty grim on the snow track, lacking cornering grip, and was a massive 14 seconds slower per lap than the best.

The margin was closer on the wet circuit – six seconds – but it still lacked traction and lateral grip compared to rivals.

The compound obviously doesn’t like the cold, as it was ninth in the wet braking test, but more competitive in the aquaplaning, which isn’t temperature dependent. It managed a close third on the dry handling circuit, but ended up eighth in the dry braking test.

It’s hard to see what season suits the Vier, as the summer option was some way ahead in the dry tests. Even at this price, it’s hard to recommend.

Kumho needs to look at this again – its all-season tyre fails to shine in any conditions.