Italian winter rubber really shines when the roads get wet 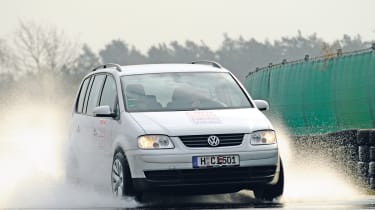 This Pirelli rubber starred when the roads were wet, rather than covered in snow. A stellar performance on the curved aquaplaning circle put it a long way ahead of its winter and all-season rivals, and it was close to the summer Continental in the final scores.

It had to give best to the winter Conti in straight aquaplaning, but it was quicker on the handling track and just a fraction behind the swift Michelin.

The Sottozero really felt at home on the cold, wet circuit, with sharp turn-in and plenty of grip through the turns with the rear well under control. It was a little off the pace of the best on snow, with a poor braking result not helping. It needed three metres more than the winner, although its traction was a fraction better.

In the dry the Pirelli was a match for the best, and it should prove easy on the pocket, too. It was among the cheapest premium winter tyres and topped the rolling resistance test, which will help fuel economy.