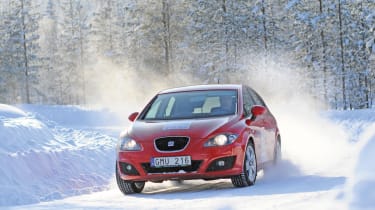 For many years, Vredestein offered one of the few all-season tyres on sale in the UK. This version has better grip on snow than a standard tyre, while retaining decent performance on dry roads.

It narrowly gives best to the Hankook all-season, but some may prefer the Vredestein’s superior dry ability. On the Skanska snow test it took a hard-fought victory at the front of a pack that was closed up by our test car’s ESP system. Care was needed applying power, but it held its line well.

On the slippery stuff, it just had the edge over the Hankook. It was the same in the dry tests, with the Vredestein proving the best in braking – although it was more than four metres behind the summer tyre. The rolling resistance result is more worrying, as the Quatrac will use three per cent more fuel than the Pirelli.

The Vredestein has to give best to our all-season choice in the wet, where the Hankook had the edge, although it may have been closer in warmer temperatures.

If performance in the dry is important to you, this is a better choice than the Hankook.