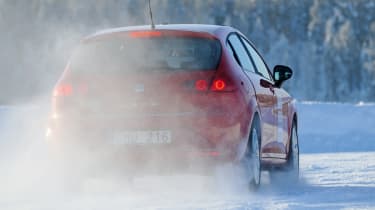 Last year’s winner has to settle for runner-up spot this time around. It’s a different pattern, but like last year’s UltraGrip 7+, it’s the tyre to be on when roads are covered with snow.

It was consistently near the top of the results for the Swedish tests, proving one of the best around the swooping Skanska track and holding the line longer through tight turns than rivals. In the wet of the cold Contidrom it failed to match its prowess on the snow, but was by no means disgraced as it ended up a second or so behind the winner on the handling track.

While it was unable to do the lap time, it felt safe, with good grip on the power through turns and a decent balance. On the dry circuit it was more than a second off the pace of the grippy Vredestein, but compared better to its winter competitors.

It was a similar story with braking, stopping within half a metre of the best winter pattern. There are better tyres for fuel economy, but the UltraGrip was only a little way off the leaders.

Secure on snow, but advantage isn’t quite enough to overcome performance elsewhere.