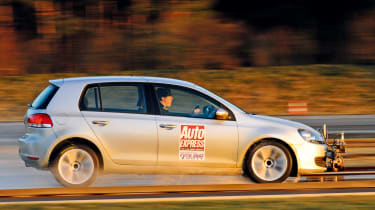 Our pick of the all-season tyres, but it was close, with only the Optimo’s wet performance giving it victory over Vredestein. Both tyres make a good case for all-season patterns, as they beat their winter rivals in dry braking, and were near the top on the handling track.

Winter patterns had the edge on the white stuff, but the Hankook and Vredestein were close, and miles ahead of the summer alternative. The Optimo struggled to get on terms around the Skanska track, where it had less grip than the Vredestein, and was two seconds behind its rival. It also needed almost three more metres to stop on snow when compared to the winning winter tyre. The temperature dependent wet tests suited it better, with second in braking and fourth for handling.

The Hankook also performed well in the wet and dry tests, although rolling resistance was a letdown. So this is a compromise tyre during both seasonal extremes, but some will consider it to be a compromise worth making at this price.

The all-season tyre to go for, with relatively small compromises in winter and summer use.