Pre-production Dunlop Winter tyre was consistent in all tests 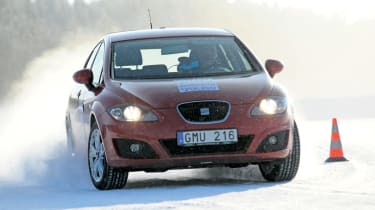 The timing of our test counted against this new tyre from Dunlop, as it was too early for a production version to be supplied. For that reason, we’ve not given it an overall ranking.

But if the production tyre performs like our sample did, Dunlop has a great product on its hands: It would have finished third, with 99.1 per cent. And at the price we found it for, it will be the preferred option for some.

It was most effective in the dry, with a good rolling resistance result, and was fractions behind the winning Vredestein in braking and handling tests. It also topped the slalom test. On the snow handling track, it had good turn-in, with little rear movement, which inspired confidence.

It was also effective at stopping on snow, bringing the car to a halt in 20 metres – only 30 centimetres behind the best. The same consistency was carried into the wet tests, where it again turned in well. It did lose grip as lock was increased, although it always felt safe and progressive.

If the production version is anything like our sample, then the Dunlop is a good option.