How to improve your van's fuel economy 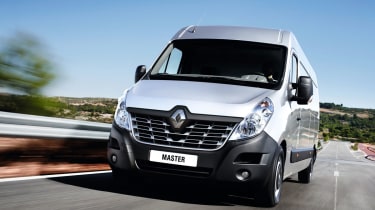 For van owners, the most frequent outgoing they're going to have in keeping it running is paying for fuel. But with the price of diesel creeping up yet again, it means more and more of your expenses are going towards fuel every week. While it's unfeasible for business users to upgrade to a more efficient van every time the price of fuel goes up, Auto Express has some top tips to help you go further on a tankful, helping to keep your bottom line looking healthy in the process.

The vast majority of vans and light commercial vehicles on sale in the UK are diesel, and if you're looking for a pick-up truck, every single one officially sold in the UK is diesel - if you want petrol, you'll have to import one from the USA. There is a slight transition towards petrol occurring, though. There have been petrol versions of small vans from Ford, Citroen, Peugeot, Fiat, Renault, Mercedes and Vauxhall for a while, although these are often base models that offer low payload capacity and not a lot of pulling power.

• Van insurance: how to get the best deal

However, Volkswagen is now offering its advanced TSI petrol engines from its road car range in the compact Caddy and mid-sized T6 Transporter alongside the diesels variants. While these models still can't match diesel for ultimate fuel economy, they're suitable for urban van drivers conscious of the extra particulates and gases emitted by diesel vans.

If you really want to slash your fuel costs, it might be worth considering an electric van (EV). The market leaders are small vans in the shape of the Renault Kangoo ZE and Nissan eNV200, and there are EV versions of the Peugeot Partner and Citroen Berlingo available. Renault is expanding its EV range with an all-electric version of the Master ZE, too, while Mercedes has eVito and eSprinter vans coming online soon.

Over time, electric vans have made great strides in terms of battery range, and if you're a van user who does multiple short trips that total less than 150 miles in a day, then an electric van really is on the cards as an efficient alternative to a diesel van. Charging is the main issue with electric vans, so as long as you have the facility to do this overnight, range anxiety may never be an issue.

If you're worried about payload, be aware that the extra weight of a battery pack does reduce the amount an electric van can carry, but these vans are being targeted towards multi-drop delivery services more than anything, where maximum payload isn't an issue.

• Choosing the right extras for your van

Currently there's no such thing as a plug-in hybrid van, but there is a Mitsubishi Outlander PHEV Commercial. This offers the same low emissions as the SUV, but with a two-seat cabin with a large load bay in the back and blacked-out windows. However, as it falls under light commercial vehicle (LCV) tax rules, there aren't as many tax savings as there are on the car.

If you're dedicated to diesel, it's still a fuel that offers a good balance of efficiency and power, but there are things you can do to boost your economy even further. Below we cover five ways that you can improve your van’s MPG and help a tankful take you further.

Clear out the clutter

Using a van on a daily basis is likely to see it fill with clutter pretty quickly. The cab will be a depository for food, drinks, papers and all sorts of rubbish, while the back of the van can easily end up full of off-cuts, spare parts and other waste not needed on-site. 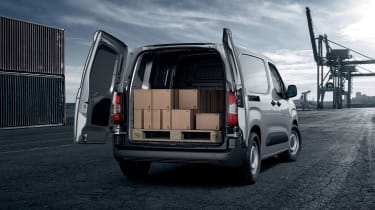 All this clutter will be annoying, and it will add unnecessary weight, which has a negative impact on fuel economy. Take some time during the week to give your van a clear out, and while it might not save much, it should help fuel economy.

If you have a payload that needs transporting to another location, try and do it as soon as possible, because driving around with that extra weight is likely to have a bigger impact than you might imagine.

Anticipate the road ahead

As you're driving, keep an eye on the road ahead and be prepared for situations that might occur. If you see traffic slowing down in front, lift off the throttle early and slow down gradually, because the smoother you are, the less fuel you'll burn.

A good trick to practice is to anticipate the phasing of traffic lights. If you can see a red light ahead, see if you can time it so that you don't have to stop for them. It's harder work for an engine to move a stationary van than it is to speed up one that's already moving, so you'll save fuel and have a smoother drive, too.

Many new vans now feature stop-start systems that cut the engine when you're stuck in traffic. Simply put a manual van in neutral - or press the brake pedal hard on a van with an auto gearbox - and the engine shuts off. Put the van back into gear (or lift your foot off the brake) and the engine fires up again before you're ready to pull away. 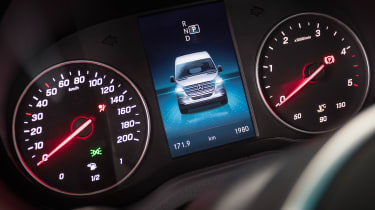 These systems don't always work - they might not operate if it's too cold, or the air-conditioning is on full blast - but they do save a healthy amount of fuel when they are in use.

If your van doesn't have stop-start, you can still use the same method to save fuel. Simply switch off the ignition when you're stuck in traffic and you'll be saving fuel. It might be a bit of a chore, but you'll see the benefits at the end of a busy week. It’s only worth shutting off the engine if you’re likely to be stationary for 15-20 seconds or more though, so you’ll have to time it right.

Get into as high a gear as possible

It's best to shift up through the gears as quickly as possible, because the higher the gear, the less revs the engine is holding on to. Lower revs mean less fuel is being pumped into the engine, so you're getting a fuel saving by not doing very much at all.

If you have a heavy payload, then it's harder to pick a high gear to drive in. But if you need to downshift to help your van get up a steep slope, try and get back into a higher gear as soon as possible.

Keep your van in shape

Tyre pressures are one critical part of van ownership that can be overlooked. Under-inflated tyres will be dangerous if you're carrying a heavy load, they will wear at a higher rate and they’ll harm fuel economy with their extra rolling resistance.

• How to keep your van and its content safe

Optimum tyre pressures will be located on a sticker in the door frame of your van (or in the owner's manual), and there will be different pressures for different payloads, ranging from empty to a full load. We'd recommend investing in a tyre pressure gauge and pump, as these will be more accurate than an air pump at a petrol station forecourt.

It's also a good idea to keep your van maintained properly with regular servicing. Keep up with maintenance, and your van will be in the best shape to keep it running efficiently. Over time, soot build-up in diesel engines can clog injectors and other parts, which can harm your van's efficiency and proper maintenance will keep this in check.

What are your van fuel economy tips? Let us know in the comments...