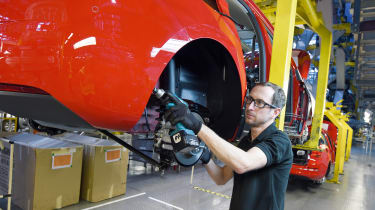 The head of Peugeot and Citroen (PSA) has met with Vauxhall union bosses for a “frank exchange” of ideas, as the French company weighs up how it will integrate the British brand into its portfolio of companies.

McCluskey explained the PSA chief “also talked of working with Unite to construct a roadmap for future operations in the UK”.

Following the talks, PSA released a statement that said the company “proposed to implement the principle of co-construction with the Unite union, in order to define a roadmap to rebuild the industrial performance of the Vauxhall factories in the United Kingdom, in a reasonable manner.”

At the start of 2018, it was announced Vauxhall’s Ellesmere Port plant would see a further 250 job losses, following an announcement in October last year the factory would shed 400 jobs. The British marque’s new owner, PSA Group, is set to move production of the Vauxhall Astra from two shifts to one early in 2018.

At the time, Vauxhall said it would undertake a mandatory 45-day consultation over the fresh 250 voluntary redundancies, and that it would attempt to minimise the impact of job losses.

The initial 400-job loss announcement from PSA, which acquired Vauxhall and its European counterpart Opel from GM for £1.9bn in August 2017, came as a result of “challenging European market conditions” according to a PSA spokesman.

The Group, which also owns Peugeot, Citroen and DS, also said that manufacturing costs at Ellesmere Port were higher than at other major plants in the group, making it vulnerable to job cuts.

Vauxhall employs 4,500 people in the UK as a whole and 1,800 at the Ellesmere Port plant in Cheshire.

Vauxhall itself has been quick to point out that the move to scale back Astra production has nothing to do with uncertainty around Brexit. Vauxhall Astra sales have declined along with those of other traditional C-segment family hatchbacks as the market has moved towards crossovers and SUVs. With a new Astra due in the early 2020s, Vauxhall claims that the move is intended to make the plant as efficient as possible in a bid to be chosen to build that car.

The PSA statement said that no decision on where the new Vauxhall Astra will be built would be taken until the uncertainty around the UK’s exit from the European Union had cleared. Stating that once PSA had “enough visibility on the future trading relationship with the EU, and the plant competitiveness has been addressed, the company will be in a position to consider future investments."

Read our in-depth review of the Vauxhall Astra...