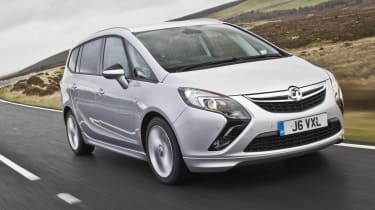 Vauxhall has released full details of the most significant overhaul of its engine line-up in years. Three new engine families (which will spawn 13 different engine variants) and several new automatic and manual gearboxes will be introduced by 2016, and Auto Express had the opportunity to test drive a range of early prototypes.

A brand-new 1.6 CDTI engine will be introduced first on the seven-seat Zafira Tourer in early summer, before being rolled out across the entire range with power outputs ranging from 94bhp to 158bhp. With its all-aluminium block, stop-start and clever tech such as a two-stage oil-pump and high-pressure fuel injectors, it returns fuel economy of 68.9mpg and emissions of 109g/km, while covering 0-62mph in 11.2 seconds.

We drove a prototype, fitted with a 134bhp 1.6 CDTI, on a short road route near Vauxhall’s Russelsheim engineering centre and were instantly impressed by the new engine’s refinement compared to the much noisier 2.0 CDTI. With maximum torque of 320Nm arriving at 2,000rpm, it struggled to haul along the Zafira’s bulk from really low rpm, but once the turbos got spinning it pulled smoothly and cleanly, and was more than capable of maintaining a fast cruise.

The good news for petrol fans is a new 197bhp ‘Performance Turbo’ version of the 168bhp 1.6 SIDI Eco Turbo engine we’ve already driven in the Cascada convertible. There are no economy figures yet, but Vauxhall promises a 13 per cent improvement in fuel consumption compared to the outgoing 1.6 turbo, while 300Nm of torque is a 30 per cent improvement.

We tried the new engine fitted to a five-door Astra, although the first model to get it will be the Astra GTC later this year; when it does it will provide an intriguing warm-hatch alternative to the 276bhp Astra VXR. Throttle response is virtually instant, particularlly if you hit the Sport button, while the booming engine note is sounds better than most high-powered 1.6-litre turbocharged engines we’ve driven.

Three new gearboxes are also on the way – a smoother six-speed manual, an eight-speed auto for the Insignia and a robotized five-speed manual for the Adam and Corsa. We sampled the latter fitted to an Adam (it will be offered as an option in a year’s time), and the results aren’t nearly as bad as you might expect.

Automated manuals, as fitted to the Smart ForTwo and VW up!, have a reputation for frustratingly slow shifts that cut the engine’s torque output momentarily, causing you to jerk back and forth in your seat. It’s a similar story with this new gearbox, but Vauxhall has managed to minimise the pause, so with the slightest lift of the throttle during shifts you can make surprisingly smooth progress. It’s far from perfect, but considering how much cheaper, lighter and fuel efficient these gearboxes are than traditional torque-converter autos, you can see why Vauxhall has gone down this road.

There’s just one engine left to mention, and that’s the new 1.0-litre turbocharged three-cylinder petrol that’s will soon be fitted to the Adam. There wasn’t a prototype on hand for us to test, but Vauxhall confirmed that it will go on sale in the UK in early 2014.