Sporty version of Vauxhall Adam to cost from £16,995, with deliveries from March 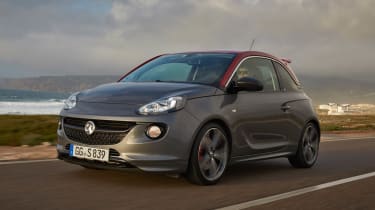 Vauxhall has revealed it has priced its sporty Adam Grand Slam from £16,995.

The new sporty addition to the Adam range will the most expensive offered in the UK to date and is priced to go head-to-head with the Abarth 595 Turismo.

A range of 10 paint colours and four roof colour schemes will be available – including a ‘Red ’n’ Roll’, exclusive to the Grand Slam. The Grand Slam receives a racy bodykit and different interior trim, however Vauxhall will not make figure-hugging Recaro sports seats an option in the UK unlike Opel in Germany. A spokesperson said the British firm wants to keep the Grand Slam affordable so has decided not to offer them.

Auto Express revealed Vauxhall’s decision to switch from Adam S to Adam Grand Slam before Christmas, while in other markets the sporty hatch will continue to be called Adam S. The UK took the decision to change the Grand Slam to avoid confusion with the previous-generation Corsa which was available in an entry-level ’S’ trim.

Currently Vauxhall has shifted more than 22,000 Adams in the UK since its introduction 18 months ago. Around 70 per cent of Adams are bought by females and Vauxhall executives expect the Grand Slam to appeal more to male buyers. Around 750 units of the Grand Slam are expected to be sold a year and deliveries begin in March.